With the ATP Tour set to resume after a five-month break, we look at the 2020 season so far for our top-ranked Aussie men. 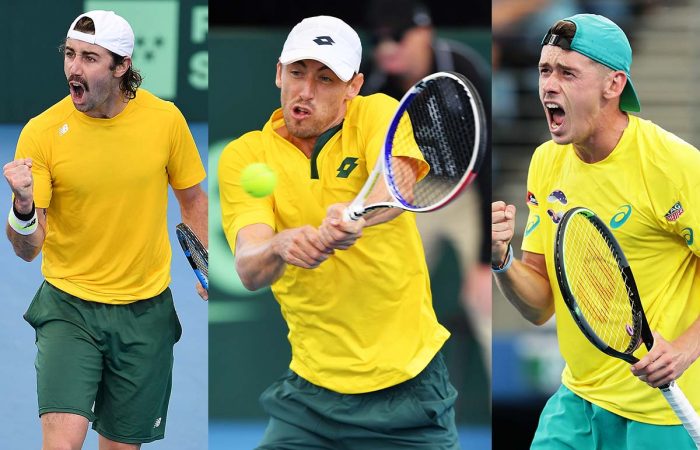 With only days until the ATP Tour resumes after the longest break in professional tennis since World War II, many Aussie players are excited to get back on court and recapture their promising early 2020 form …

ALEX DE MINAUR
Rank: No.26
Win-loss: 2-3
After posting two top-20 wins at the ATP Cup in early January, an abdominal injury forced De Minaur to withdraw from the Australian Open. The 21-year-old only managed to contest one more event before the tour shutdown. Following a strict lockdown at his Alicante base, De Minaur participated in several Spanish exhibitions in recent months. The top-ranked Aussie man expects the return to tour to be a challenge. “It’s not easy to pick up where you left off,” he says.

NICK KYRGIOS
Rank: No.40
Win-loss: 6-3
Kyrgios helped Australia advance to the ATP Cup semifinals then stormed into the Australian Open fourth round, upsetting world No.17 Karen Khachanov in a five-set thriller in the round of 32. His last completed match was a four-set loss to Rafael Nadal at Melbourne Park, with a wrist injury affecting the 25-year-old in February and March. The former world No.13, who has been at home in Canberra during the tour suspension, is not rushing his return. “Let’s take a breath here and remember what is important, which is health and safety as a community,” he says of his decision not to contest the US Open.

JOHN MILLMAN
Rank: No.43
Win-loss: 8-4
Millman defeated two higher-ranked opponents to reach the Australian Open third round in January, matching his career-best result. He then pushed Roger Federer to five sets in the round of 32. After recovery from a calf injury, the 31-year-old spearheaded the Australian Davis Cup team for a first time in March and won two singles matches against Brazil in Adelaide. Despite some safety concerns, Millman has travelled to America this week. “I probably need to start earning a living again, to be honest,” says Millman, who spent the tour shutdown in Brisbane.

First impressions of the US Open series are really positive. It’s noticeable how hard the USTA has worked to create a comfortable and safe environment. I’m pumped to be back playing. Top effort from the entire USTA team.

JORDAN THOMPSON
Rank: No.64
Win-loss: 4-5
The 26-year-old extended world No.12-ranked Italian Fabio Fognini to five sets in the Australian Open second round. In his next tournament, Thompson upset world No.18 John Isner to reach the New York quarterfinals. His good form continued in Davis Cup in March, helping secure an Australian victory against Brazil with a steely singles win. Thompson spent the tour shutdown training at his Sydney home.

JAMES DUCKWORTH
Rank: No.83
Win-loss: 9-3
Following a first ATP-level semifinal appearance in February, Duckworth won an ATP Challenger title to rise to new career-high ranking of No.71. His impressive form earned a Davis Cup debut in March. The 28-year-old underwent minor right shoulder surgery shortly after the tour was suspended. “We thought it would be a good chance to try a little arthroscopy and see if we can improve something,” says Duckworth, who has been back training at the Queensland Tennis Centre in recent months.

ALEXEI POPYRIN
Rank: No.103
Win-loss: 5-7
An Australian Open third round appearance was an early season highlight for the 21-year-old. Popyrin spent the tour shutdown in France, where he trains at the Mouratoglou Tennis Academy. He took part in the Ultimate Tennis Showdown in Nice in recent weeks, competing against a high-quality field. “My game and the way I play right now is suitable for that high level,” says Popyrin, highlighting the growing self-belief that is sure to help him when the tour returns. He only plans to play in Europe, opting not to contest the US Open.

CHRISTOPHER O’CONNELL
Rank: No.116
Win-loss: 7-8
Two quarterfinals at ATP Challenger level early in 2020 helped O’Connell, who took world No.16 Andrey Rublev to four sets in the Australian Open first round, achieve a career-high ranking of No.114 in February. “I was on a bit of a roll and hoping to keep that momentum going,” says the 26-year-old, who spent the tour shutdown in Sydney. O’Connell took part in the UTR Pro Tennis Series last month, but was sidelined with injury during the second event. He is now set to play his first US Open.

MARC POLMANS
Rank: No.119
Win-loss: 4-6
“I made the best start to the season I possibly could have,” says Polmans, whose highlight was a career-first Grand Slam singles win to reach the Australian Open second round. Sitting at a career-high ranking of No.119 when the tour was suspended, Polmans is determined to make a top-100 breakthrough soon. “I’ve had some matches now against top 100 guys and I’m starting to feel like my game can match with them,” he says. The 23-year-old won a UTR Pro Tennis Series title in Melbourne in July and will make his US Open main draw debut later this month.