To mark the 20th anniversary of Wimbledon 2000, we look back on a memorable tournament for Australian tennis.

On court, the 2000 tournament proved very memorable for Aussie players too. Highlights included …

Pat Rafter, gentlemen’s singles finalist: Rafter was the best performer of 11 Australian men in the 2000 singles draw. The No.12-seeded Queenslander advanced to his first Wimbledon final, overcoming No.2 Andre Agassi in a memorable five-set semifinal. The 27-year-old Rafter pushed top seed Pete Sampras to four sets in the final, with the American scoring a 6-7(10) 7-6(5) 6-4 6-2 victory to win his 13th career Grand Slam and surpass Australia’s Roy Emerson as the overall leader in Grand Slam titles.
“It was a good experience. I’d love to be back there, win or lose, again because it was a very nice feeling being out there,” Rafter said.

Mark Philippoussis, gentlemen’s singles quarterfinalist: A titanic 4-6 6-3 6-7(7) 7-6(4) 20-18 victory over Sjeng Schalken in a five-hour third round match rewrote history, becoming the longest final set in tournament history at the time. The No.10-seeded Victorian then knocked out local hope and No.8 seed Tim Henman in a five-set fourth round showdown. The 23-year-old Scud’s memorable winning run ended with a loss to Agassi in the quarterfinals.

Jelena Dokic, ladies’ singles semifinalist: As a No.30-ranked teen, Dokic made a career-best Grand Slam run. The 17-year-old did not lose a set as she advanced to the semifinals, where world No.2 Lindsay Davenport stopped her magical run. Dokic also made the third round in the ladies’ doubles draw with American partner Jennifer Capriati.

Todd Woodbridge and Mark Woodforde, gentlemen’s doubles champions: In their final Wimbledon appearance as a team, the Woodies claimed an Open era-record sixth title. The top-seeded pair faced their toughest challenge in the quarterfinals, where they recovered from a two-sets-to-one deficit to defeat Canadians Daniel Nestor and Sebastien Lareau 8-6 in the fifth set. 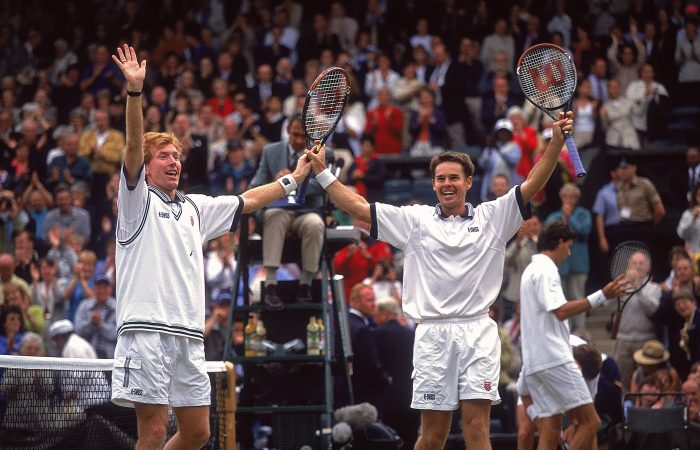 Sandon Stolle, gentlemen’s doubles finalist: The 29-year-old, who was the No.2 seed alongside Dutch partner Paul Haarhuis, advanced to his first Wimbledon final. The Woodies proved too strong in the final, scoring a 6-3 6-4 6-1 victory. The duo also survived a quarterfinal scare, defeating an 18-year-old Roger Federer and his Australian partner Andrew Kratzmann 6-7(5) 5-7 7-6(2) 6-2 6-2.

Rennae Stubbs, ladies’ doubles semifinalist: Stubbs and her American partner Lisa Raymond advanced to the semifinals, where the top-seeded duo lost to a three-set clash with fourth seeds Julie Halard-Decugis and Ai Sugiyama. Stubbs was also the top seed in the mixed doubles draw alongside Woodbridge, exiting in the second round.

FEATURE: Todd Woodbridge on why he misses Wimbledon

Lleyton Hewitt, mixed doubles finalist: After a shock opening round loss as the No.7 seed in singles, Hewitt turned his attention to mixed doubles. The 19-year-old partnered Belgian girlfriend Kim Clijsters to reach the final as an unseeded pair. Eighth-seeded American duo Donald Johnson and Kimberly Po won the final 6-4 7-6(3).

Alicia Molik and Bryanne Stewart, ladies’ doubles third round: The all-Aussie duo made the final 16 in the ladies’ doubles draw. A highlight was an upset of 16th seeds Tina Krizan and Katarina Srebotnik in the opening round.