No man has won more Wimbledon titles in the Open era than Australia’s Todd Woodbridge. With the cancellation of the 2020 tournament due to the COVID-19 pandemic, the nine-time gentlemen's doubles champion reflects on missing The Championships for the first time in 34 years … 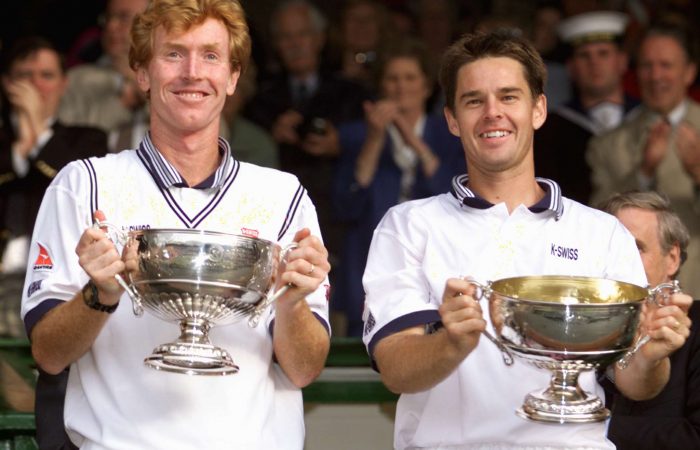 Wimbledon has been a big part of my life. I have spent almost a month of every year since I was 16 at Wimbledon. It feels wrong that I will not be there this year. I am going to miss being around Wimbledon village and in London too. It is such a big change to my lifestyle and to what I have known.

My first Wimbledon was in 1987. I was still a junior, but also played singles, doubles and mixed doubles qualifying at Roehampton that year. I qualified for the mixed doubles, which gave me a player pass to enter the All England Club in the first week. I was so excited. As a junior, you normally had to wait until the second week to get on site. At that time, it was just a dream to be there among all the action. I am quite traditional and it meant a lot that I could now say that I had played at Wimbledon. That feeling of having made it still sticks with me. Never did I expect that I would end up attending so many years in a row and winning many titles there too.

Jason Stoltenberg and I won the boys’ doubles title that year. The final was washed out, so we played on a Monday and I remember driving to France straight afterwards for an under-21 teams event. There was no Wimbledon Champions’ Ball, which is one of the tournament’s great traditions, for us that year.

Some of my @wimbledon collection, today would have been the start 134th Championship… I first played there in 1987, hard to believe we won’t be there this year… in pic is 93 men’s doubles trophy, 2019 Senior Invitational. Clock is 1989 junior singles runner up, singles semi medal (front left), 2000 champions dinner menu. #wimbledon #memories #trophy #silverware #singles #doubles #mixed #grass #tennis

My love of Wimbledon began at an early age. When I was in primary school, I would go to bed earlier than normal when it was on. I would go to sleep at 7pm and my dad would wake me up at 10pm, so I could sit up for two or three hours to watch the start of play on television. It was the middle of winter, so we would put the kerosene heater on and grab a blanket. I did that nearly every year until I started to travel myself. Watching the defending champion play the first match on Centre Court was always special. I remember never wanting to miss that match and can vividly recall watching Australia’s Peter McNamara play John McEnroe in the first round in 1985.

Ironically, the first time I qualified for singles in 1988 I drew Pat Cash, who was the defending champion that year. It meant my very first main draw singles match was played on Centre Court in the 2pm fixture I always loved watching. Even now, I get goosebumps remembering that. That was just like ‘wow, here I am playing on this court’. I was still a junior and at that level, you do not expect to be put on a show court. To get the defending champion and have that unique opportunity to open the tournament, that was a bucket list moment and still is one of the highlights of my Wimbledon career.

Cashy thrashed me. I played okay, even though I only got four games. I still remember walking out onto Centre Court for the first time. When you take that right-hand turn and step out onto the grass, the feeling is electric. The sound is like walking under high power lines when you can hear the electricity clicking and buzzing. It is extraordinary and is something I will never forget.

The electricity of Wimbledon is what makes the tournament so special. I feel it every single year when I walk through the gates to the All England Club for the first time. The atmosphere is so magical, seeing the Centre Court drapped in ivy and the natural grass reminds you this is the home of tennis. I can hear the crowds as I walk through the grounds, even when it is empty. I can visualise the great moments – both the ones I have personally had as well as the ones I have witnessed. It is just a phenomenal experience. There really is no other place like Wimbledon.

I won my first Wimbledon doubles title with Mark Woodforde in 1993. I remember after winning that final, sitting down at the chairs and thinking ‘is that it?’ It really did not feel like we had won the tournament. It was the strangest feeling. I was ready for another match. I really had to take it in that we had just won the title. I think the greatest accolade for a tennis player is to say that you have won a Wimbledon title and if you can do that, you are in special company.

At the Wimbledon Champions’ Ball that year, I took the menu and collected signatures from all the other Wimbledon champions in the room. They did not like you doing that, but I said ‘I’m a champion and they’re a champion, so I can ask for autographs’. I now have a collection of menus with signatures of the likes of Fred Perry and Don Budge, amazing champions from yesteryear. These menus would probably be worth a bit of money now.

I believe one of the Woodies’ great achievements as a team, as well as individually, was becoming honorary members of the All England Club. The easiest way to become a member is to win the singles title. There is no precedent to how many times you need to win a doubles title before you might be invited to join the club. Mark and I won our sixth title in 2000. Mark had said he was retiring, so that was the Woodies’ last tournament. About a month after the tournament, mail arrived at my home with no markings on the outside of it. I opened it up and it was letter from the All England Club chairman inviting us to become members. For me, that meant we had made it. That was very special, it is an opportunity not given to everybody. You have to have done incredibly well, both on and off the court, to get that opportunity.

It is sad to see Wimbledon cancelled this year – but I am not surprised. I think we all thought it was going to happen, but the reality of the call was a sign of the seriousness of the challenges we have faced this year. The All England Club and their management are very good operators, they do not take risks. When you look at the history of the tournament, it has taken something as massive as COVID-19 to shut it down. It was the right call too, as we can see now. When we get back there, I am sure it will be better than ever. I think everybody – from the players, officials and fans – will appreciate the tournament even more when it does return. It is still the home of tennis.