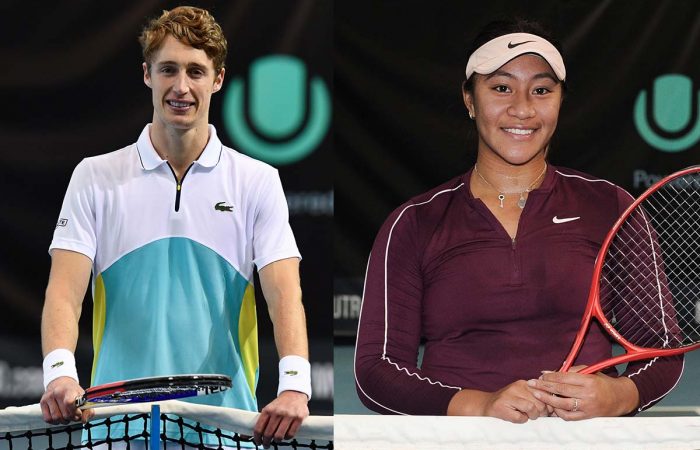 Marc Polmans and Destanee Aiava have made a perfect return to competition, winning UTR Pro Tennis Series titles in Melbourne.

The event was the first competitive opportunity for Australian players in Victoria since professional tennis was suspended in March due to the COVID-19 pandemic.

Bolt, the tournament’s second seed with a UTR of 14.71, started strongly to become the first player to take a set off Polmans this week.

“It was tough. Bolty was serving well, so he was not giving me too much rhythm. I felt like it took a while for me to find my game,” said Polmans, who only won one of eight break point opportunities in the opening set.

Polmans stepped up in the second set, conceding only 11 points to level the match.

“I felt like I got better and better as the match went on,” said Polmans, who was at a career-high ranking of No.119 when professional tennis was suspended in March.

The momentum swung again in the match tiebreak, as Bolt raced to a 7-2 lead. Polmans kept fighting though, reeling off eight consecutive points to secure victory.

“It was a bit of a tough one to come back from. I was happy I was able to find a way,” Polmans said.

.@marcpolmans wins the #UTRProMatchSeries in Melbourne, fighting back to defeat Alex Bolt 4-6 6-1 [10-7]

Next up is the women's final between Storm Sanders and Destanee Aiava. Watch live here: https://t.co/KP3o48IhX7 @MyUTR pic.twitter.com/IiXcclic8z

The 23-year-old described the return to competitive play as “awesome”, admitting he enjoyed feeling nervous ahead of today’s match.

“I hadn’t felt that for a while,” Polmans said of his pre-final nerves. “You just don’t know what’s going to happen. That’s the best feeling.”

Polmans, who has been isolating in Melbourne since playing his last tournament in early March, plans to continue using the UTR Pro Tennis Series as a chance to prepare for next month’s US Open.

“That’s the main goal, so all these matches now are in preparation for the US Open,” he said.

“I’ve been pulling up not too bad the past few days, I think tomorrow though I will be a little stiff. But I’ve been lucky that the body is not responding too bad. I’m happy that’s the case after quite a few months away from tournaments.”

Aiava secured the women’s singles title with a 6-1 7-6(9) victory against Storm Sanders.

“I feel like I played pretty well,” said Aiava, who has a UTR of 12.22. “She’s a tough opponent, she’s been playing unbelievably well so it was a really tough match today and I’m happy to get the win. It’s good to be back playing matches again.”

Sanders, the tournament’s top seed with a UTR of 12.48, almost pushed the final into a deciding match tiebreak but could not convert three set points in a tense second set tiebreak.

“My anxiety levels were a bit high,” admitted Aiava, who did not drop a set for the tournament. “But I was able to control my mental side and stay calm.”

For the 20-year-old from Melbourne, the steely win was a perfect ending to her first tournament in three months.

“I did start to miss competition quite a bit, so I’ve really enjoyed this week,” she said. “I’m looking forward to the next one.”