Rediscovering the love of playing

A break from tennis can reignite your passion and help you return stronger, as Aussie players Monique Adamczak, Ajla Tomljanovic, Christopher O’Connell and Alex Bolt have all proven. 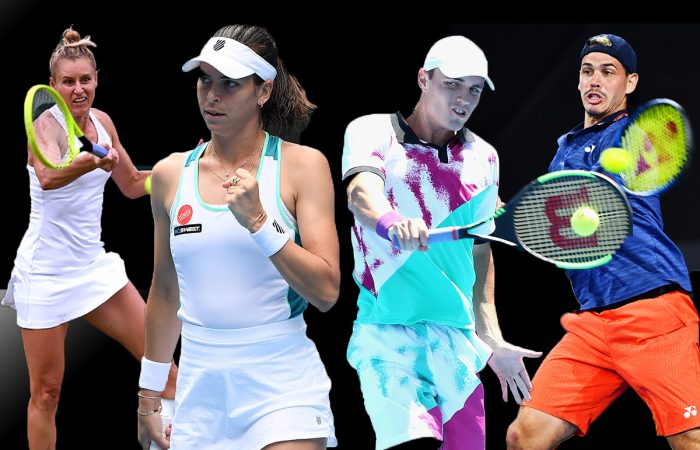 The COVID-19 pandemic has presented many challenges – but there could be some benefits too.
For world No.103 Alexei Popyrin, the extended break has reaffirmed his passion for tennis.
“It just showed me how much I actually love the sport, how much I love playing,” the 20-year-old admitted. “(This) gives me extra incentive to get back out there and work harder.”
Returning from setbacks with a newfound determination and appreciation for being on court can quickly reap rewards too, as many of Popyrin’s peers have demonstrated in recent years.

Shoulder surgery kept Ajla Tomljanovic off court for most of the 2016 season, proving a testing period both physically and mentally for the then 22-year-old.
When Tomjlanovic returned to the tour in February 2017, she was more determined than ever.
“I know now that it can be a good thing in life when you do have setbacks,” she said.
“It really tests you, especially your mental state and how much you really want it. But it’s a good test, because it makes you realise what you want.”
Unranked at the time, Tomljanovic had to work hard to return to the top 100.
“It is not tough in the beginning because you’re just so excited to play again, but then it sinks in that you have to grind,” she admitted.
Tomljanovic has since re-established her place on tour, setting a new career-high ranking of No.39 in April 2019 and recording five top-20 wins.
“After everything that has happened, to get a career-high it is really rewarding,” she said.

In 2016, Alex Bolt took a break from professional tennis and returned home to South Australia.
“Tennis wasn’t fun anymore,” he explained of his decision.
Bolt, who was 23 at the time, worked as a fencing contractor and played local football during the winter.
“I didn’t think I’d ever pick up a racquet again,” Bolt admitted to ATPTour.com.
“(But) when I saw guys I grew up with doing well, my fire started to burn a bit. Jordan Thompson and I had been climbing the ATP rankings together. Yet there he was cracking the Top 100 and winning four ATP Challenger events that year. Me? I was sitting at home.”
An inspired Bolt returned with a point to prove. Less than four months later, he qualified to make his Grand Slam debut at Australian Open 2017.
More highs have followed, including a career-high singles ranking of No.125 and beating two former top-10 players to reach the Australian Open third round in 2019. Earlier this year he became the 112th player to represent Australia in Davis Cup, named in the team alongside Thompson.

After rupturing her anterior cruciate ligament in 2015, Monique Adamczak thought her tennis career was finished.
“I was like ‘I’m done with tennis. It’s time to give back’. I started coaching at schools and set up my own tennis academy,” she said.
But Adamczak, who was aged 33 at the time, began to miss competing and returned to tour in September 2016 to play doubles.
After prioritising singles earlier in her career, Adamczak enjoyed immediate success in the team discipline. She soared up the doubles rankings to make her top 100 debut in June 2017. She has maintained her top 100 ranking for the past three years, peaking at No.44 in February 2018 and winning two WTA titles.
“I’m just so lucky. It’s kind of like a miracle,” an appreciative Adamczak says of her extended career.
“I am so grateful to be out here and I cherish every tournament I play.
“Persistence is a big part of why I’m still playing. Sticking with it when times get tough has been my strength – that is what I am most proud of.”

When knee tendonitis forced O’Connell off tour in 2018, he found himself cleaning boats on Sydney’s Pittwater Harbour and working as a part-time tennis coach. While this helped financially, these new experiences also motivated the then 23-year-old not to give up on his own tennis dream.
O’Connell returned to win a tour-leading 82 matches during the 2019 season. He won two ATP Challenger titles to end his comeback season ranked No.120 and earn an Australian Open 2020 wildcard.
“If you just keep persisting and try and stay healthy, then eventually it’s going to happen for you,” O’Connell explained of what he has learnt from his experiences.
Shortly before the COVID-19 pandemic led to the suspension of professional tennis, O’Connell had achieved a career-high ranking of No.114.
“Things happen and you’ve just got to deal with them,” O’Connell explained of his mindset during this current setback.
“I’m treating it like an injury. I’ve had plenty of injuries over the years and I always come back strong.”

The tennis court is the perfect place to exercise safely.
@toddwoodbridge and John Fitzgerald take us through some simple steps for healthy hitting.
#TheCourtIsCalling pic.twitter.com/ZDAM32Yq5w