Storm Sanders reflects on her singles comeback and the importance of having fun on court. 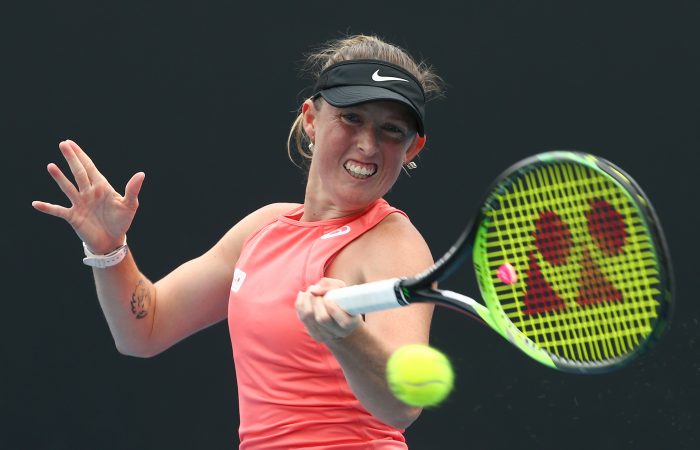 The 25-year-old refuses to feel frustrated at the situation though. Instead, she is determined to use this setback to her advantage.

“I had a really good start to the year and end to last year too. I did have a lot of momentum,” Sanders told tennis.com.au from her isolation base in Melbourne.

“It has been a little bit hard, but in a way it’s been nice to stop and reflect on why I’ve been having these results and how to keep improving to go further in the rankings.”

The left-handed Sanders was unranked when she resumed her singles career in October 2019 after a near two-year break. Six tournaments later, she has skyrocketed to a world ranking of No.276.

Sanders has won 21 of her past 27 singles matches, including a first Grand Slam-level match to reach the second round of Australian Open qualifying. Other highlights of her remarkable return include winning an Australian Pro Tour title in Playford in November and making the AO Wildcard Play-off final in December.

Two wins over top 125-ranked opponents in Brisbane International qualifying in January further boosted her ranking. Sanders then posted her best tour-level singles result in six years during February, reaching the Hua Hin second round as a qualifier.

With that rapidly building momentum stalled for now, the studious Sanders recognises her own improvement does not need to stop during isolation.

“I’m trying to make the most of the time by setting little fitness goals, watching some of my recent match footage in both singles and doubles and trying to find ways to improve,” Sanders said.

Sanders is already a top-100 ranked doubles player, currently at No.75 following a title-winning run with Arina Rodionova in Hua Hin.

Hoping to focus on both singles and doubles when professional tennis returns, Sanders knows she needs to keep building her singles ranking to enter more WTA-level events.

“I would really like to get my singles ranking down so I’m playing singles qualifying at Grand Slams. That’s a priority for me,” she said.

However, with uncertainty surrounding when and how professional tennis returns, Sanders is not placing too much emphasis on ranking goals.

“I’m trying not to think about that too much right now,” she said. “I’m focusing on what I can control and working on my training as much as I can.”

It is a mature outlook and one that highlights her own personal growth in recent years.

Sanders peaked at No.202 in the WTA singles rankings as a 19-year-old in 2014, shortly after upsetting world No.39 Peng Shuai in Hobart to record her first WTA-level main draw win. She was promoted to the Australian Fed Cup team that year too.

However after injury and confidence struggles, Sanders had decided to stop playing singles by the end of the 2017 season.

“I was putting too much pressure on myself. When I stopped I was ranked around 350-400 and I felt when I went out there, I would panic and freeze up. I didn’t know what to do on the court, I was really lost,” Sanders said.

“I could not compete as hard as I wanted to and what my brand is.”

The Queensland-born Sanders had just broken into the world’s top 100 in doubles at that time, forming a strong partnership with fellow Australian Monique Adamczak that netted one WTA title from three tour-level finals in 2017.

“I think because I was doing so well in doubles, I felt like my singles should be the same,” Sanders admitted.

“I was planning on stopping singles to focus on my doubles for a bit, but then I injured my shoulder and that completely wiped everything out for a year.”

After missing most of the 2018 season through injury, Sanders returned to the tour in February 2019 to play doubles.

With the encouragement of her friends and family, Sanders decided to test herself on the singles court once again eight months later.

“I felt healthy and fit, I was hitting a good ball and the people around me – my coaches, family and boyfriend – were telling me I should give it another go,” Sanders said.

“When I stopped playing singles two years earlier, I just wasn’t enjoying it at all. So I wanted to get out there and enjoy it again, to create some good memories of playing singles.”

> Getting to know: Storm Sanders

Returning with little expectations, Sanders won four matches in her first tournament to reach the quarterfinals of an Australian Pro Tour event in Bendigo as a qualifier. She won the Playford title a week later.

“I went out there and actually started playing really well. I was clear with what I was doing on court. I was relaxed and enjoying it so much, which I think the results showed,” she admitted.

Knowing now that too much pressure can prove crippling, Sanders is determined not to make the same mistake again in her resumed singles career.

“Everything has happened very quickly – I have only played three months of singles, which is not that much,” she reasoned. “So I’m trying not to put too much pressure or expectations on myself.”

Having rediscovered the joy in competing in singles, Sanders is simply looking forward to the tour resuming so she can continue to create more happy memories.