Australia’s No.2-ranked woman Ajla Tomljanovic will compete in a UTR event in America this weekend. 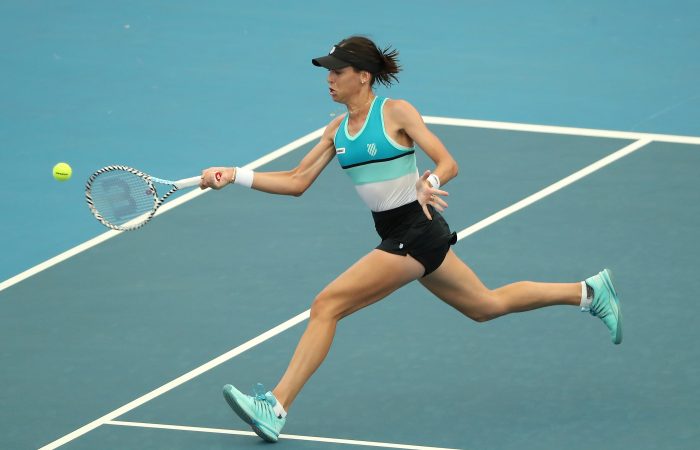 Ajla Tomljanovic is looking forward to making her competitive return this weekend.

The world No.56 is one of four competitors taking part in a UTR Pro Match Series event. She will compete against Americans Alison Riske, Amanda Anisimova and Danielle Collins in a round-robin format.

“I’m so excited just to be a part of this. I think it is the closest thing we can get to competing nowadays and I think we’ve all missed what we’ve known for all of our lives,” Tomljanovic said.

Matches will be played at a private court in Florida, with strict social distancing rules that include no fans, line umpires or ballkids, separate off-court warm-up areas and players using their own marked tennis balls.

“With all the safety protocols, I feel really comfortable going in,” Tomljanovic said.

Matches will be live streamed globally through the Universal Tennis and Tennis Channel Facebook pages.

We're fired up for this weekend's UTR Pro Match Series Presented by @TennisChannel! 🔥🔥🔥

Tomljanovic, who has spent isolation at her Florida base, admits she has missed tennis.

“Just having that feeling of playing points and having a match situation again is exciting,” she said.

“I did take a couple of weeks off when Indian Wells got cancelled, I just didn’t really know what the point was but then my body started to hurt because I wasn’t doing anything.

“I set up a little gym in my garage and then once the courts opened up I started hitting with my dad.”

“Matteo has been hitting with me too, but now he has found someone better,” she laughed.

“In the beginning we were doing a lot of bake-offs, but that wasn’t a good idea because we weren’t really training much and we didn’t like how we were feeling. Now we’ve figured who is good at pasta, good at baking and good at making steaks, so we have our own things we have to do.”

Learning Italian has also been one of her isolation goals.

“I did start off really well, but then I kind of lost interest,” she said. “I improved a lot in the first couple of weeks but then it got really tough, so I’m kind of throwing in the towel a little bit.”

Tomljanovic celebrated her birthday in isolation too, turning 27 earlier this month.

The UTR Pro Match Series runs from 22-24 May, with matches beginning at 2am AEST.