As Davis Cup preparations continue in Adelaide, Australian captain Lleyton Hewitt is confident his team can defeat Brazil this weekend. 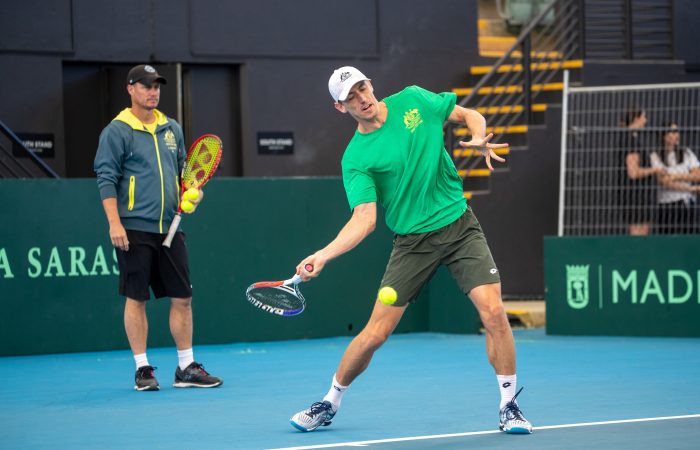 Speaking to media in Adelaide today, Hewitt insisted the absence of injured top-ranked pair Alex de Minaur and Nick Kyrgios through injury did not diminish his team’s chances.

“I’m very happy with the guys I’ve got in the team,” Hewitt said.

“I couldn’t be more confident and happy with how we are placed right now.

“You can either sink or swim in Davis Cup playing for Australia. I’ve got a lot of confidence that these boys I’m going to put out there are going to put up a hell of an effort.”

“I’m really confident with these boys, and I think when I show confidence in them as well I think they’ll go to a new level.”

No room for doubt. @lleytonhewitt has full confidence his 🇦🇺 @DavisCup team will put up their best effort. #GoAussies | #AUSBRA | #DavisCup pic.twitter.com/ipP1otNS7P

Hewitt is thrilled to include world No.83-ranked Duckworth and No.146-ranked Bolt in the team for a first time.

“Ducks and Bolty have been around a lot of ties. They’ve been hitting partners, orange boys and done a lot of work for the team. I love the story that goes with it for those guys,” Hewitt said.

“What I have instilled into them is that this is your time now boys.”

Alongside coaches Jaymon Crabb and Tony Roche, Hewitt is keeping a close eye on practice sessions to help decide which players take to the court this weekend.

“Rankings get thrown out the window. For me, it is about preparing these guys as well as possible. Whoever I pick, it won’t be based on rankings. It will be based on who we think can go out there and do the job for us,” he said.

The depth in the Australian team is a concern for Brazil’s captain Jamie Oncins, who admitted his team led by world No.82 Thiago Monteiro would enter the tie as underdogs.

“I think Australia is the favourite,” Oncins said. “Even without (De Minaur and Kyrgios), they are still a strong team.”

The tie winner qualifies for the Davis Cup by Rakuten Madrid Finals from 23-29 November.

Memorial Drive Tennis Centre in Adelaide hosts the Davis Cup qualifying tie from 6-7 March, with the order of play to be determined at the official draw on Thursday 5 March.