After celebrating many career firsts already this season, an in-form James Duckworth is now embracing his Davis Cup debut for Australia. 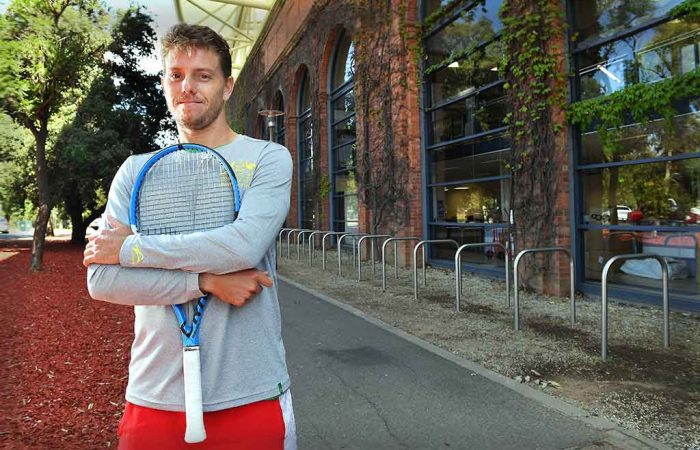 As James Duckworth enjoys the best form of his individual career, the 28-year-old is equally embracing the team setting.

“Its’s a lot of fun. It’s not too often that you’re in a team environment. Tennis is obviously an individual sport but (here) we all hang out a bunch,” said Duckworth, who joins John Millman, Jordan Thompson, Alex Bolt, John Peers and captain Lleyton Hewitt for Australia’s Davis Cup qualifier against Brazil at Memorial Drive in Adelaide this week.

“There’s a lot of banter being thrown around. It’s a lot of fun and I think we’re all enjoying these weeks.”

Duckworth first experienced the team setting as an Orange Boy when Australia met Japan in Brisbane 10 years ago. He’s since featured in other squads, but this week’s tie against Brazil marks Duckworth’s official debut in the Australian Davis Cup team.

“I’ve had a few (good results),” said an understated Duckworth of reaching a first ATP level semifinal in Pune and claiming an 11th Challenger-level title in Bengaluru, which saw him peak last week at No.71 in the rankings.

“The last few months I’ve played some pretty good tennis and I’m really excited to get the call-up.”

The team debut is a reward for persistence through injury for Duckworth, who endured elbow, foot and shoulder surgeries in 2017 and 2018 before finding his best form at Challenger level. In 2019, Duckworth led the tour with 49 match wins and four titles from the six finals he contested.

There’s also been impressive versatility for the hardworking Sydneysider. At Australian Open 2020, Duckworth exited to Aljaz Bedene in a five-set first round before teaming with countryman Marc Polmans to reach the men’s doubles quarterfinals.

Progress in both those disciplines ensures Duckworth is well positioned to take to the court against a determined Brazilian team, which the Australian describes as a tough match-up.

“(Thiago) Seyboth (Wild) just won an ATP event in Santiago. He played yesterday so he’s obviously playing well (and is) confident. Thiago Montiero has been around for a while – (a) lefty with a big forehand. (and) Marcelo Demonliner has played some good doubles. They’ve got some good players,” Duckworth related of Australia’s opponents.

While acknowledging that the tie is “definitely tougher” after experienced countrymen Nick Kyrgios and Alex de Minaur were sidelined by injury, Duckworth also appreciates the cohesive team dynamic.

“I think all the guys here are playing well. Some good form,” he said. “They’ve had some pretty good results over the past few months. Everyone here is practising quite well at this stage as well. Whoever goes out is going to do their best.”

That’s also true away from the court, Duckworth jokingly relating the intense competition between Lleyton Hewitt and John Millman ahead of a golf afternoon for the Australian team. “He’s the best talker that’s for sure,” he laughed of Millman. “I think Lleyton’s the best.”

Enjoying the fun banter, Duckworth is also exciting for the more serious challenge when Australia takes to the court against Brazil from Friday. “We’re going to go out there and give it our best shot,” he said. “I think we’ve got a good chance.”