Ajla Tomljanovic records a straight-sets win over No.31 seed Anastasija Sevastova before Arina Rodionova and Priscilla Hon join her in round two at AO2020. 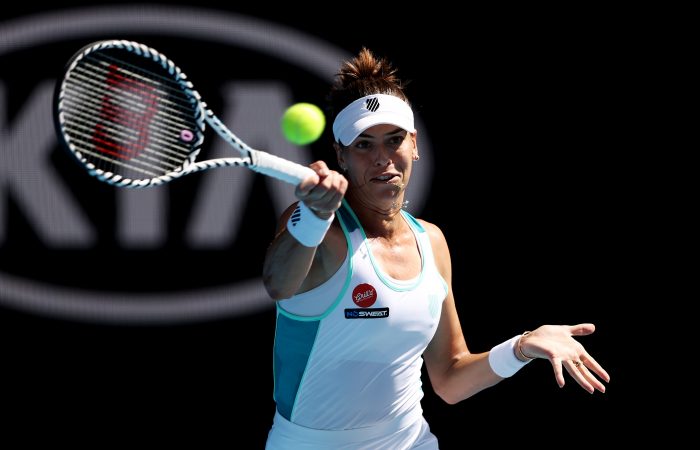 Home charge Ajla Tomljanovic produced one of best “quality-wise” wins of her career to soar into the Australian Open second round with a 6-1 6-1 demolition of No.31 seed Anastasija Sevastova.

The Australian endured some tough draws to open her 2020 season, pushing eventual champion Karolina Pliskova the distance in Brisbane, before a close two-set tussle with Simona Halep over in Adelaide.

“This is one of my best wins quality-wise in a Slam, first round. Felt really good to be out there. I think from the first point, I felt ready,” stated the 26-year-old.

“I don’t think too much went wrong today, felt like I was hitting the ball clean.

“Honestly, it felt way, way closer than one and one, especially in the second set. Those 2-0 games and I think 3-1 were very important. I was gassing a little bit at 2-0. I was really happy to close it out.”

In other Aussie women’s results, Arina Rodionova and Priscilla Hon joined Tomljanovic in the second round with career-first main-draw wins at Melbourne Park.

Arina Rodionova battled to a 3-6 7-6(5) 6-0 triumph over Kateryna Bondarenko, before Hon clinched a 6-3 6-4 victory over Kateryna Kozlova in a late-night match at Melbourne Arena.

The world No.163 Rodionova, who won the Australian Open Play-off last month and last week beat Sloane Stephens en route to the second round in Adelaide as a qualifier, booked a meeting with No.9 seed Kiki Bertens.

Hon, also a wildcard after a career-best season in 2019, set up a second-round meeting with Australian Open 2016 champion Angelique Kerber in the second round.

Tomljanovic arrived in Melbourne knowing her recent performances were of high quality, but is adamant that level must be maintained for a deep run.

“It just does a lot (for confidence). I was playing well in Brisbane and Adelaide. Had a couple of tough losses. Just kind of backing up my quality of game was big. Just shows that that consistency is there, even though it’s just the third tournament of the year,” continued the world No.52.

“Have a couple more weeks to show that consistency throughout. But it’s a good start.

“I’m feeling good on the court, translating what I’ve been doing really well in practice into matches. Even though I’m coming out really nervous, because I want to do really well, still being able to weather the nerves, still come out with a good game is really important for me going forward.”

"It's just so good to be back here and win my first round."

Advancing to the second round at Melbourne Park for the first time since 2015, the world No.52 admitted it was a relief to clear the opening hurdle.

“Yeah, for sure. I think I’ve had a couple of tough draws, real heartbreaker last year against Jo (Konta),” reflected Tomljanovic.

The Australian had lost her two previous encounters against Sevastova, both on the grass of Mallorca in 2018 and 2019.

“Coming in, I still thought this was a tough draw. Actually, had her two years ago at 6-0, 3-0 up, ended up losing. I know she never goes away. She’s so tricky,” Tomljanovic said of the Latvian.

“Just have to keep being consistent and aggressive. Yeah, just really pleased to be through.”

With consistency and control aggression achieved, the home favourite never gave the world No.33 a chance to find a route back into the contest by saving seven break points and hitting 19 winners.

The Australian will now prepare with a showdown with former world No.1 Muguruza in the second round.

“Garbine had a good week last week, as well (Hobart QF). It’s going to be tough for me. Definitely a big-hitting match next round, for sure,” added Tomljanovic, who has split two previous meetings with the two-time Grand Slam champion.

“That’s how tennis is. You don’t really have much time to enjoy the wins.”