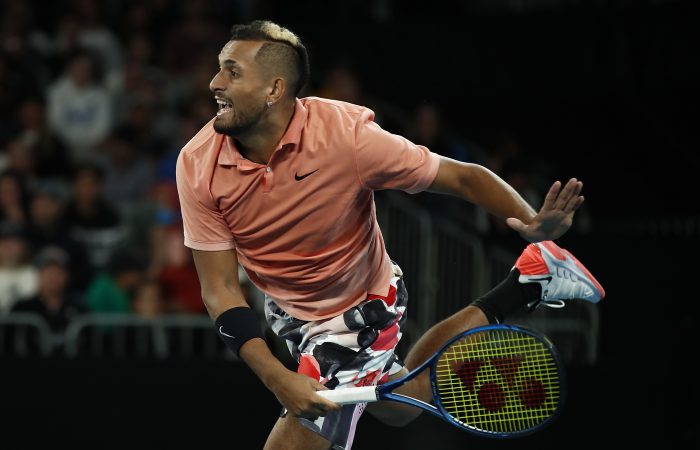 The No.23-seeded Australian got a solid workout from the world No.53 but was never broken and eased to victory in two hours and 13 minutes.

“I was excited to get out here,” he said afterwards.

“Obviously it’s been a pretty emotional couple of months for all of us (with the bushfires) so I wanted to come out here and put on a good performance.

“He’s a tough competitor. He’s a very good player. I played him once, I knew it was going to be tough.”

At one stage Kyrgios pulled up gingerly after a point late in the match but insisted there was nothing to it.

"If he's watching this, that was for you little fella."@NickKyrgios dedicates his first round win to countryman @alexdeminaur who is unfortunately missing #AO2020 due to an abdominal injury#AusOpen | 👑 x 👿 pic.twitter.com/MsiGdkanQ9

Kyrgios plays the winner of the match between Pablo Cuevas and Gilles Simon in the second round.

The 23-year-old was one of eight Australians to advance on day two, with John Millman, Jordan Thompson, Marc Polmans, Ajla Tomljanovic, Alexei Popyrin, Alex Bolt and Arina Rodionova all posting first round victories.