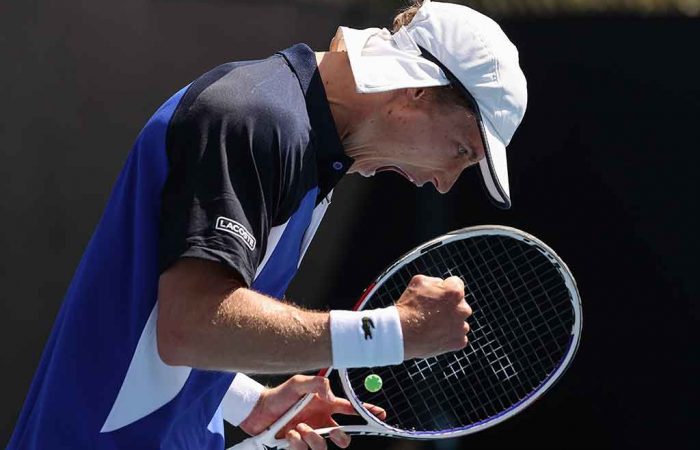 Wildcard Marc Polmans secured his first ever Grand Slam victory to cap a superb day for Australia’s male players on Day 2 at the Australian Open.

John Millman, Jordan Thompson and Alexei Popyrin also booked their places in the second round, but it was Polmans who made the headlines with an epic 6-4 6-3 4-6 6-7(8) 6-4 win over Mikhail Kukushkin on Court 7 in a match which lasted more than four hours.

Polmans served for the match at 5-4 in the fourth set and had three match points in the subsequent tiebreak, a turn of events which gave him an uncomfortable sense of déjà vu, having lost to Denis Kudla from two sets up at Australian Open 2019.

“Last year was a tough one to take, but I’m just happy I was able to finish it in the end this time,” he said. “I think he did well to hang in there and the crowd really helped me get over the line in the fifth set.”

Polmans had to dig deep in the decider against the experienced Kazakh, coming from a break down to eventually prevail.

“It started to creep into my head a little bit in the fifth,” he said, referring to his 2019 loss to Kudla. “It was tough. But it was just a few points here and there, and I just tried to play a little more aggressive and try to get him moving.”

The 22-year-old has become a bit of a cult figure among his fellow Australian players for his trademark legionnaires hat, a fashion statement which was subsequently trending on social media after his victory.

“I’ve been wearing it since I was eight years old, and I’m always going to continue to wear it,” laughed Polmans. “At the start the other players were a bit sass, weren’t quite sure what I was doing. But now they’ve seen me on the tour for the last couple of years so they’ve kind of got used to it. All the Aussie guys know what’s up.”

Earlier in the day, the experienced 30-year-old Millman got the ball rolling with a 7-6(3) 6-3 1-6 7-5 win over the dangerous Frenchman Ugo Humbert who won the Auckland title last week.

“Humbert I think is one for the future.You’re going to see a lot of him.” said Millman. “ He’s one of the form players coming into this tournament. Some of the guys he beat, it was a really impressive week for him. I think that first set was really crucial, because it was quite physical. I don’t know how long it went for, but it felt like it was well over an hour.

“In best-of-five set matches when you play such a physically demanding first set and you win that, it’s kind of a body blow. I thought his level dropped off a tiny bit in that second set. And then he turned it on its head and it became a bit of a dog fight again.”

Millman has also relishing competing in front of the highly vocal crowds on the outside courts at Melbourne Park, and he felt that has always played a role in the successes he’s had at the Australian Open.

“I like feeding off the crowd’s energy,” he said. “I need that. I try to bring that physicality, and sometimes you need that little bit of motivation on the sidelines. I love the crowd support that I get, and the more rowdy they are, the drunker they are, the better!”

Thompson was particularly impressive as he saw off Alexander Bublik 6-4 6-3 6-2, but there was disappointment for James Duckworth who lost another epic. Duckworth led Slovenia’s Aljaz Bedene by two sets to one but was unable to hold on, going down 6-4 6-7(5) 6-7(5) 6-2 6-4.

And Max Purcell, who played so well to come through the qualifying rounds last week, saw his Australian Open come to an end at the hands of the remarkably talented 18-year-old Jannik Sinner. Tipped by some as the future of men’s tennis, Sinner won 7-6(2) 6-2 6-4.