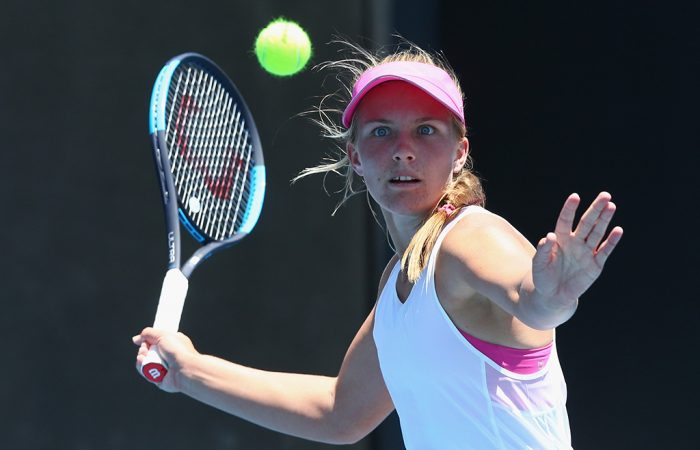 Maddison Inglis will look to continue her strong 2019 form when she kicks off her AO Play-off campaign as the top seed on Tuesday at Melbourne Park.

On Monday, it will be No.1 seed Alex Bolt headlining the men’s draw, which uses a best-of-five-sets knockout draw to determine who will win an Australian Open 2020 main draw wildcard.

Bolt opens against in-form Blake Mott while Inglis takes on 15-year-old Charlotte Kempenaers-Pocz, a winner on Saturday in the 18/u Australian Championships final to earn a wildcard into the Play-off.

“Obviously she’s playing well and loving the conditions and she’s got a few matches behind her,” said Inglis, who also won the 18/u title as a 15-year-old back in 2013.

“It will be a tough match, and I’m ready for anything. She’s young, she doesn’t have any pressure, so you can’t go out there expecting anything but her to play some really good tennis.

Bolt faces a player who made a comeback to tennis in September after two years away from the sport.

Since his return, Mott claimed two Pro Tour titles back-to-back and has built a 14-2 record across four tournaments, beating Bolt in the second round of the Traralgon ATP Challenger in late October.

“It’ll be a tough week ahead — everyone deserves to be here,” said Bolt, who advanced to the third round at Australian Open 2019 and was a finalist at the AO Play-off in December 2018.

“I’m looking forward to stepping out onto the court on Monday to play against a good friend and tough competitor.”

Elsewhere in the men’s draw, second seed Andrew Harris takes on Tristan Schoolkate, the winner of the boys’ 18/u Australian Championships on Saturday.

Third seed Max Purcell takes on wildcard Dane Sweeny — a runner-up to Schoolkate in the 18/u event and a winner of the UTR Wildcard Play-off tournament — while No.4 seed Aleksandar Vukic faces Jacob Grills in round one.

Inglis, currently ranked No.128, leads a field also featuring No.2 seed Lizette Cabrera, the world No.130 who takes on wildcard Gabriella Da Silva-Fick.

“It’s an unreal opportunity that we get to play for a wildcard into a Grand Slam,” Inglis said.

“It’s going to be really cool that one of our peers and friends is going to be in the main draw of a Slam. It’s really exciting, and fingers crossed it will go my way (laughter).”