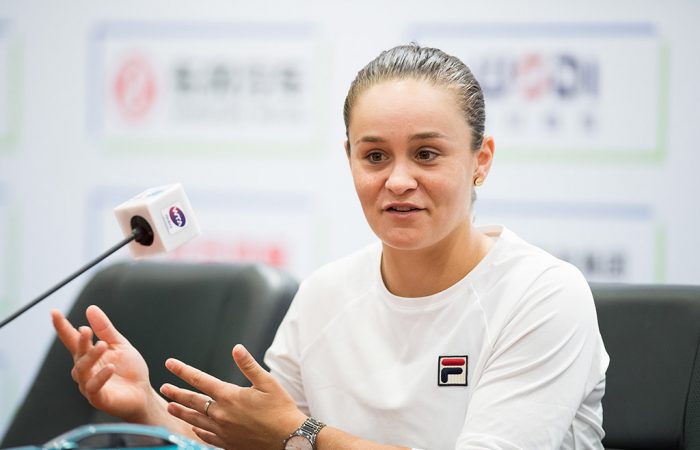 Ash Barty kicks off her WTA Wuhan campaign against Caroline Garcia — a rematch of their 2017 final in Wuhan.

Barty is the No.1 seed at the US$2.82 million event and after a first-round bye takes on the former world No.4 Garcia, who won that 2017 clash and who beat Daria Kasatkina 6-2 6-2 in her opening match on Sunday.

It wouldn’t be a party without the No.1! @ashbar96 on the red carpet in Wuhan pic.twitter.com/LHOG3iAUS2

“I think I feel a lot fresher than I was this time last year,” Barty told the media ahead of the tournament. “I’m feeling really good. I know I’ve played well here in Wuhan in the past before. Looking forward to hopefully another week where I’m down at the business end.”

The world No.1 is joined the main draw by Sam Stosur, who received a wildcard to contest the tournament and who has drawn French Open semifinalist Amanda Anisimova as her first-round opponent.

Stosur arrives in Wuhan fresh off her appearance in the final at last week’s WTA tournament in Guangzhou.

Another Australian, Ajla Tomljanovic, played her first match on Sunday, falling in the first round to the free-swinging, big-hitting Ukrainian Dayana Yastremska.

Barty and Stosur are not the only Australians competing in China this week — five Australian men will contest ATP events in Zhuhai and Chengdu.

Our top two men, Nick Kyrgios and Alex de Minaur are in Zhuhai, with De Minaur taking on another Australian, John Millman, in the first round.

Millman comes to Zhuhai full of confidence after claiming the ATP Challenger title in Kaohsiung on Sunday.

Kyrgios is the sixth seed and opens against Andreas Seppi while the winner of the De Minaur-Millman match could take on former world No.1 Andy Murray in round two.

In Chengdu, Alexei Popyrin came through two rounds of qualifying to join fellow Sydneysider Jordan Thompson in the main draw.

Popyrin will go for his third straight win when he faces Fernando Verdasco in round one, while Thompson takes on Canada’s Vasek Pospisil for a place in the last 16.