Kyrgios through, Millman out under lights at US Open 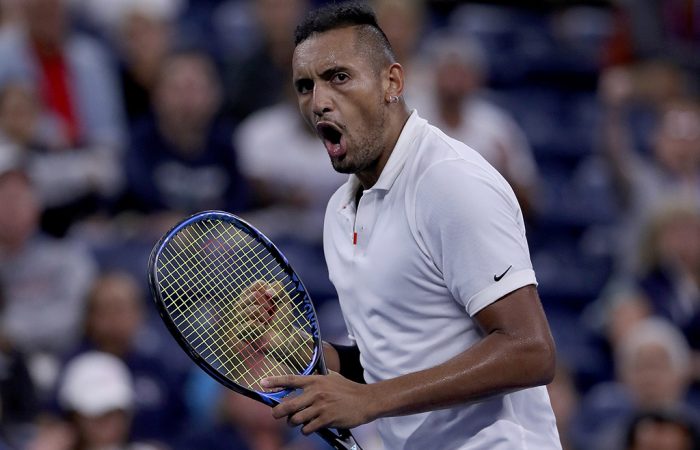 Nick Kyrgios capped a banner day for Australia at the US Open after beating Steve Johnson in straight sets to reach the second round.

MORE: Thompson, Popyrin win through at US Open

Kyrgios scored a 6-3 7-6(1) 6-4 first-round win over the American on Tuesday night to become the fifth Australian winner on Day 2.

John Millman was not so lucky, drawing world No.2 Rafael Nadal in the opening round and fighting hard before going down to the Spaniard in straight sets at Arthur Ashe Stadium.

Other Australian winners on Tuesday included Alexei Popyrin, Jordan Thompson, Thanasi Kokkinakis and Ajla Tomljanovic. They joined Ash Barty and Alex de Minaur, winners on Monday, in the second round.

Kyrgios had too many guns for his 86th-ranked rival, setting up a second-round meeting with French wildcard Antoine Hoang, the world No.104.

“I honestly don’t know much about him, but obviously he’s feeling confident, obviously he won (today). I’m not gonna think about it at all; I’ve got a day off tomorrow so I’m gonna go to a cafe, chill, get a coffee, and all that,” Kyrgios said on court.

The Australian’s level went up a notch in the second set tiebreak, when he raced to a 6-0 lead off the back of some brilliant shot-making.

He broke immediately in the third set and again in the third game to move ahead 3-0, and never relinquished control.

“Stevie’s a hell of a player. He’s one of my good mates in the locker room as well. But he played well; I knew I had to play the right type of tennis. I had to serve well and just dictate play and I’m just happy to get through,” Kyrgios said.

“(The second set tiebreak) was pretty clean. I knew it was an important set; I think if he got that set then the match could have been very different and probably still playing right now. So I’m just happy that I got it done in two hours.”

Meanwhile, Millman said he wouldn’t trade being pummelled by Rafael Nadal on one of tennis’s grandest stages for anything in the world.

“I’ve still got a story. Definitely a good story,” Millman said after succumbing 6-3 6-2 6-2 to the No.2 seed in the US Open first round at Arthur Ashe Stadium.

Nadal next faces Kokkinakis for a place in the third round.

Millman can tell his grandkids one day that he was the first – and possibly only – player to face all-time greats Nadal, Roger Federer and Novak Djokovic in consecutive matches at the same major tournament — albeit over two years — and on the premier court.

The affable Australian famously took down Federer in the fourth round last year before making Djokovic fight for his quarterfinal victory en route to the title.

“How lucky am I with my career? I’ve played all the big guys on the biggest courts in the world,” said Millman, who has also jousted with Andy Murray on Wimbledon’s hallowed Centre Court.

“That’s what happens sometimes when you get a few dud draws, but (on the other hand) you don’t really remember the first or second rounds against guys who might not be at that calibre.

“But you do remember those ones for sure and they’re the ones people want to ask questions about and want to know about.”

Millman may not want to talk too much about his third foray to Arthur Ashe Stadium after Nadal was near his brutal best in conceding just seven games to the 30-year-old underdog.

“It’s tough. Relentless. It is relentless abuse,” Millman said when asked what it was like confronting the mighty Spaniard in full flight.

“It is like a boxing match where you are getting hit again and again and there is no let up.

“There was a moment there where I just wanted to get on the scoreboard in the third set. When you are down four-love against Nadal, you’re in a bit of trouble.”

The defeat left Millman facing a rankings drop to about 90th in the world after failing to defending his 2018 quarterfinal points.