Thompson, Popyrin win through at US Open

Jordan Thompson and Alexei Popyrin progress to the second round of the US Open thanks to straight-sets wins on Tuesday in New York. 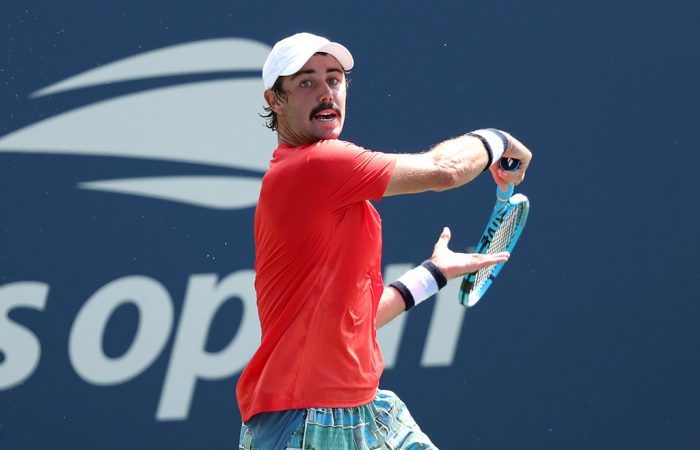 Australian Jordan Thompson marched into the US Open second round with a straight-sets win over the higher-ranked Joao Sousa.

Thompson is the third Australian to advance to the US Open men’s singles second round and was relentless in dispatching the 44th-ranked Sousa 6-3 6-2 6-4 on Tuesday.

Thompson, who last month climbed into the world’s top 50 for the first time, joined Alexei Popyrin in the second round after the young Aussie earlier on Tuesday ousted the vastly more experience Federico Delbonis in straight sets.

In another Australian result, Astra Sharma went down 6-3 6-4 in her first-round match against Magda Linette, who has now built a nine-match winning streak after winning last week’s WTA title in the Bronx.

Later on Tuesday, Ajla Tomljanovic and Thanasi Kokkinakis produced inspired performances to move through to the next round in New York.

Exciting prospect Popyrin, who only turned 20 this month, has earned himself a golden opportunity to make a deep run after an impressive first-round win.

Popyrin notched yet another milestone in a breakout season with his 6-1 7-5 7-6(5) triumph over the Argentine.

“It’s a great achievement for me,” said the 2017 French Open junior champion.

“It’s just the vibe of Grand Slams. I really enjoy playing (them) — the big crowds, the big courts, the big stadiums, even though I didn’t play on one today.

“I had a good crowd out there today. Some of the Aussie support, I still heard it, even if it was on a small court.”

His most vocal support came from his parents, who rode their son’s every shot while proudly sporting matching T-shirts with “Pop on Top” logos.

His reward for finishing over the top of Delbonis is a meeting with Mikhail Kukushkin after the Kazakh removed 10th-seeded Wimbledon semifinalist Roberto Bautista-Agut from Popyrin’s passage to the last 32.

“I am just going to take it one match at a time, honestly,” said the laid-back youngster, who confessed to falling asleep during his post-match massage.

“I feel like if I play at the top of my level, I can push any player to the maximum.”

Thompson, Popyrin on track for clash

Should he cash in on his good fortune, Popyrin could square off with countryman Thompson for a spot in the second week.

“That would be unbelievable,” Thompson said. “But there is a long way to go yet.”

In the form of his life, Thompson destroyed Sousa with a relentless display of power, precision and concentration. “That’s probably one of the best matches I’ve ever played – from the get-go,” Thompson said.

“Served pretty well, made a lot of returns — (on) first and second serves — and executed the game plan, so really happy to get through that one.”

In a mark of how far Thompson has come, the 25-year-old needed five sets to see off the 44th-ranked Sousa last time they met. The time before, Sousa crushed him in straight sets.

“It was the opposite today. Got through fairly comfortably and saved the legs a little bit,” Thompson said.