John Millman draws Rafael Nadal in the first round of the US Open, while No.2 seed Ash Barty opens against Zarina Diyas. 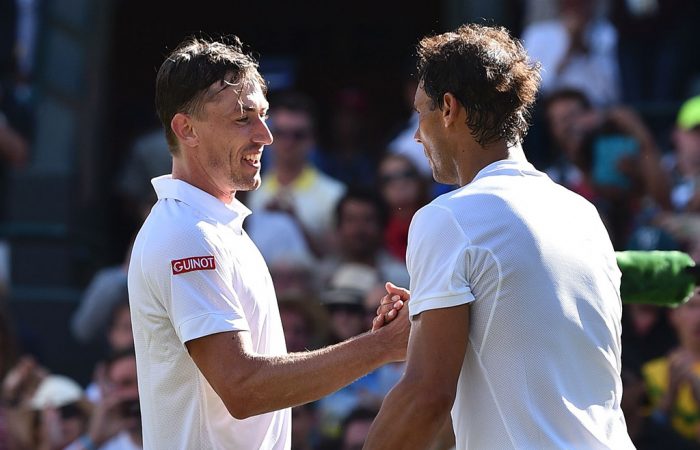 No.2 seed Ash Barty could meet Serena Williams in the US Open quarterfinals while John Millman will line up against Rafael Nadal in the first round.

Barty has been handed a seemingly easier draw than her fellow Queenslander at Flushing Meadows next week, with the highest seed she is set to face in the first four rounds being No.14 seed Angelique Kerber, the 2016 champion in New York.

The world No.2, who faces Kazakh Zarina Diyas in her opening match, faces potential match-up with Williams in the quarterfinals before a projected semifinal meeting with No.3 seed Karolina Pliskova, or fellow top-10 seeds Elina Svitolina (5) and Madison Keys (10).

On the same side of the draw, Sam Stosur faces Alexandrova Ekaterina — who defeated her in three sets in the second round of the French Open — in the first round, while fellow Australian Daria Gavrilova will take on Frenchwoman Fiona Ferro.

Big guns Naomi Osaka, Simona Halep, Kiki Bertens, Petra Kvitova and Aryna Sabalenka are all on the other side of the draw, where Australians Ajla Tomjlanovic and Astra Sharma have landed.

West Australian Sharma will face Poland’s Magda Linette in her opener with reward for the winner being a likely second-round meeting with world No.1 Osaka, while Tomljanovic — who enters the tournament under an injury cloud after retiring from a match in Toronto and withdrawing from the WTA Bronx tournament — plays Czech Marie Bouzkova.

In the men’s draw, Millman drew the short straw by facing world No.2 Nadal in his opener, a repeat of their clash at the same stage of Wimbledon 2017 — a match won by Nadal in straight sets.

The 30-year-old will have to draw on his experience at last year’s tournament — from which he is defending quarterfinal ranking points — after his last 16 victory over Roger Federer.

Australian No.1 Nick Kyrgios plays American Steve Johnson in the first round before a potential third-round clash with friend and eighth-seed Stefanos Tsitsipas. Whoever prevails could face fourth-seeded Dominic Thiem in the quarterfinals.

Alex de Minaur faces Frenchman Pierre-Hugues Herbert in the first round with a possible third-round match against seventh seed Kei Nishikori and, should he advance further, a potential quarterfinal with third seed Federer.

Wildcard Thanasi Kokkinakis is drawn with a qualifier in his opener, and should he win, he would meet the winner of the Nadal-Millman clash.

Aussies in action at the US Open