John Millman snaps a five-match losing streak in a valuable confidence-booster on Tuesday at the All England Club. 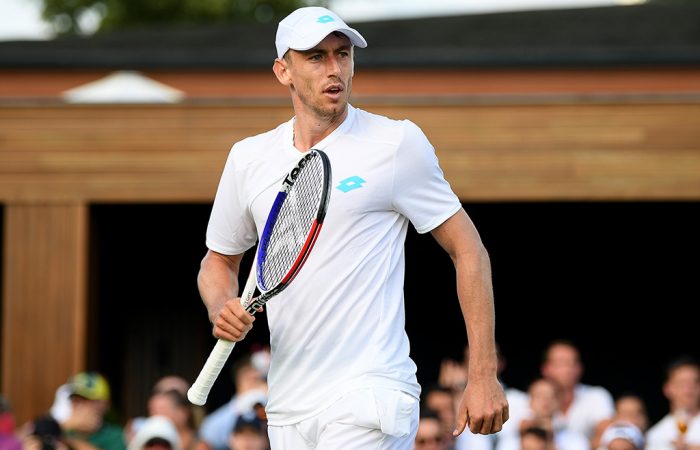 John Millman became the fourth Australian through to the second round of the men’s singles at Wimbledon following a straight-sets dismissal of Hugo Dellien.

Millman beat the Bolivian 6-2 6-3 6-4 to join Nick Kyrgios and Alex de Minaur – who won earlier on Tuesday – in the last 64 at the All England Club. Alexei Popyrin won his first-round match on Monday.

Fellow Aussies Matt Ebden and Bernard Tomic bowed out in the first round to Diego Schwartzman and Jo-Wilfried Tsonga respectively.

Millman’s victory saw the Queenslander end a five-match losing streak and set up a second-round showdown with 31st seed Laslo Djere of Serbia.

“When you get into that match, and lately it’s been discussed that maybe I’ve had a couple of tricky draws, when you get a draw like that when you feel as if, OK, this is a real opportunity to turn things around, that added expectation you put on yourself, that added pressure, can make you play not quite as free,” Millman said of playing Dellien, a player more comfortable on clay.

“And I didn’t quite feel free out there. So I’m really happy to get through that one and kind of a weight off the shoulders, get back to winning ways.

“And I’ve no doubt (with) a lot of confidence that come Thursday, I’m gonna come out there and just play a little freer, and I know that actually this surface kind of suits me if I can be in that state of mind.

“The body feels good though, and I’ll be ready to go.”

It was a happier day @Wimbledon for @johnhmillman, who storms into the second round with a 6-2 6-3 6-4 win over Bolivia’s Hugo Dellien. #GoAussies pic.twitter.com/8cDi3zrGnj

He hadn’t won a singles match since the ATP tournament in Lyon in May, but produced a solid display on Court 7 at Wimbledon with its spectacular Centre Court backdrop.

“The objective was to go out there and start off well and get the job done. I managed to do that. I’m very happy about that,” said Millman, currently ranked 64th.

“I’m quite excited by the prospect that I know I can actually improve upon that and can get a little bit better as this tournament goes on.

“I’m very happy that the tournament’s continuing for me.”

READ MORE: Barty begins with a bang at Wimbledon

“I started slow, I’m not really sure why. I’ve been trying a few things in practice with my game and stuff, set-up. Didn’t really work out in the early games. But sort of changed it, got back to normal things and played well the rest of the first (set), but too far down to get it back I suppose,” Ebden said.

“I was quite impressed by him; I can’t remember him hardly missing a ball, really. I don’t think he missed anything in the third and fourth (sets). I didn’t play too bad, but he played for sure a bit better. I think he deserved to win.

“To be honest, two months ago I didn’t know if I would be playing the grass-court season at all. I missed three months of the season with injury. It obviously hindered my preparations and training for the last few months. Haven’t been able to work as much on the movement or the physical side as much as I would have liked, but I’m building it up slowly.”

Tomic was brushed aside 6-2 6-1 6-4 by Tsonga, a former world No.5 who has twice reached the Wimbledon semifinals.