Wimbledon: Barty begins with a bang

World No.1 and top seed Ash Barty drops just six games in a resounding start to her 2019 Wimbledon campaign. 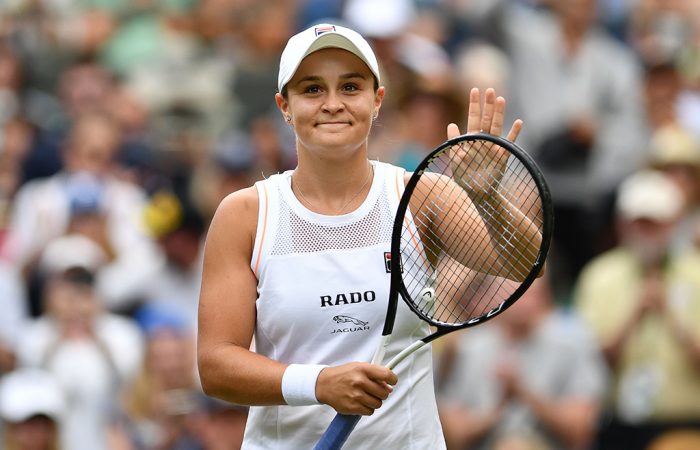 French Open champion Ash Barty extended her winning streak to 13 matches with a commanding display against Zheng Saisai in the first round of Wimbledon.

The Australian, seeded No.1 at a Grand Slam for the first time in her career, got her campaign off to the perfect start with a 6-4 6-2 win over the world No.43.

Unfortunately, compatriots Sam Stosur and Arina Rodionova were unable to join her in the second round, with both women falling in straight sets on Tuesday.

Incredibly, this marked Barty’s first appearance in a singles match on the 12,000-seat No.1 Court since she won the Wimbledon junior girls’ singles title back in 2011 as a 15-year-old.

“It’s a beautiful court to play on,” said Barty, who faces Belgium’s Alison Van Uytvanck in round two. “Had some really nice memories from juniors playing my final on that court. Played I think a doubles semi with Case (Casey Dellacqua) on Court 1.

“(We got) an incredible reception. It was really special for both Saisai and myself. It wasn’t only one of us on the tennis court. It was really nice to be able to share that with Saisai.

“The crowd was awesome. It was really nice to play in front of a pretty full crowd, on a court that I have so many good memories.

“I walked out there and was kind of fan-girling for a minute. It was really nice. Just a beautiful court to start on.”

World No.1 @ashbar96 eases into the second round at #Wimbledon with a comfortable victory over Saisai Zheng pic.twitter.com/Q4zcZqsgqN

Barty made a beautiful start, too.

Showing off the vast array of shots that are perfectly suited to lawn tennis, Barty looked immediately comfortable amid the imposing surrounds.

After breaking serve in the second game, she knifed a slice backhand down the line, charged into the net behind it, and punched a backhand volley for a winner to open a 3-0 lead.

The Chinese player worked her way back into the match, and broke the Australian in the sixth game to level scores. But when presented with this challenge, Barty lifted, breaking her opponent to love in the 10th game to seal the opening set.

From here, Barty loosened up. In a carbon copy of the first set she broke serve in the second game en route to a 3-0 lead, and frequently beat Zheng with her superior pace and power, especially off her serve and forehand wing.

It was that forehand that closed out games – seeing her extend her lead to 4-1, and then 5-2 – in resounding fashion.

And, in another example of her all-court game, she again found herself at the net, this time on match point, to close out victory.

“I think (it was) a very tricky opponent to start off with. Very happy with the way we were able to work our way into the match. Took some time to adjust to conditions and a different court,” Barty said.

“My serve was there when I needed it. In big points it was there.”

Barty showed few signs of any pressure that might accompany the tag of new world No.1 and top seed – and the attention that comes with those.

Instead, she continued her serene progress on tour and has now won her last 16 consecutive sets, a run going all the way back to her Roland Garros semifinal win over Amanda Anisimova.

“I think for me it’s a little bit irrelevant,” Barty said. “The only pressure I have is what I put on myself, making sure I’m doing all the right things, preparing in the right way. Ultimately when we play our matches, we go out there and enjoy it.

“I just play each match as it comes. There’s certainly no extra stresses on any match.”

Later on Tuesday, Stosur did well to recover from a hole against Suarez Navarro, but ultimately could not keep her momentum going.

The Australian veteran fell behind a set and a break before reeling off four straight games to lead 4-1 in the second set.

But despite holding a set point in the 10th game, Stosur couldn’t convert it, and the No.30 seed won the last three games of the match to complete a 6-2 7-5 win on Court 18.

“Early in that second set I didn’t think I was doing the wrong thing, I just needed to do it better,” Stosur said.

“I don’t think there was a terrible lot I did wrong. I didn’t hit my forehand as well as I wanted to, but my backhand was great and other things were good. There was not much in it.

“You are playing a good player too and I don’t want to take anything away from her.

“Going into this I was prepared, I felt good. But sometimes you can put yourself in the best possible position to be in and not quite have it unfold in the way you want.”

Like Stosur, Rodionova built a lead in the second set but from 3-1 ahead, the qualifier was unable to stop Townsend rattling through the last five games of the match to seal a 6-2 6-3 win.

“I thought I sort of got into it in the second set then she played a couple fo good games to break me back,” Rodionova said.

“I wasn’t serving great today and I was a little bit out of it – like it was hard for me to concentrate today. I don’t know, it was maybe just the occasion of obviously playing a Slam and we’re playing for a lot here. It was maybe a lot for me to handle for me today and, yeah, didn’t really handle my nerves that great.

“But it’s still been a great week for me – I could have easily lost first round of qualifying, and I’m still pretty happy with winning those three matches. I think it’s overall a very positive week for me for sure.

“Hopefully it will turn my year around a little bit.”