Alex de Minaur again gets the better of Marco Cecchinato at Wimbledon while Nick Kyrgios prevails in an all-Aussie, five-set tussle over Jordan Thompson. 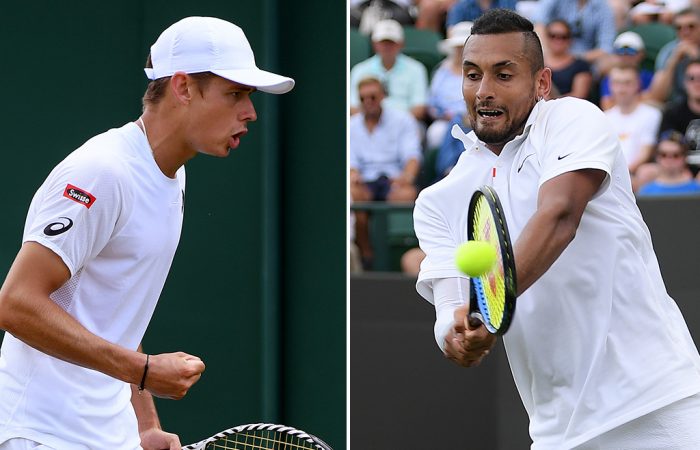 De Minaur, seeded No.25 at the All England Club, moved past Italy’s Marco Cecchinato 6-0 6-4 7-6(5) to set up a second-round meeting with Steve Johnson of the US.

Kyrgios, on the other hand, required five compelling sets to see of fellow Australian Jordan Thompson in an entertaining encounter on No.3 Court. 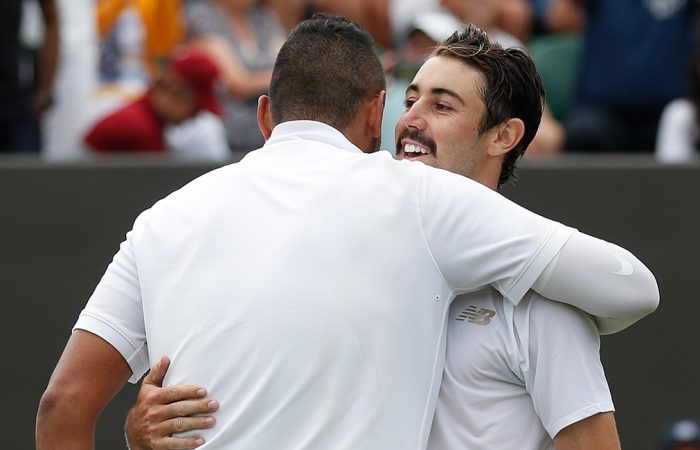 “It was incredibly tough. I think coming into today, Thommo is probably one of the most in form grass courter of the season. He made his first final in ‘s-Hertogenbosch,” Kyrgios said of Thompson, who entered Wimbledon with more wins on grass in 2019 than any other Australian player.

“I looked at my draw (and) I was excited because we’ve known each other since we were about nine. We played at every age group. To see each other playing at the highest level against each other, it was pretty cool.

“I’m sore at the moment. That was one of the longest matches I’ve played in a long time, so… Yeah, it was fun.”

RELATED: Barty begins with a bang at Wimbledon

Kyrgios’ battle with Thompson was unfolding at the same time No.1 seed Ash Barty got to work seeing off Zheng Saisai in her first-round match.

When she and Kyrgios prevailed to join De Minaur in round two, it made for the perfect start to Wimbledon for Australia’s three highest-ranked players.

World No.1 @ashbar96 eases into the second round at #Wimbledon with a comfortable victory over Saisai Zheng pic.twitter.com/Q4zcZqsgqN

De Minaur and Cecchinato represented an interesting match-up given that, 12 months ago, they clashed at the same stage of this tournament when Cecchinato was the seeded player coming off a French Open semifinal and De Minaur was a teenaged, unseeded rising star.

Yet while their roles were reversed, the result was the same.

After surviving a tense opening game, De Minaur stormed to a 6-0 3-0 lead on Court 15 and displayed an intensity not seen since before his struggles with injury – and subsequent form slump – surfaced in March.

The Italian worked his way back into the match but could not match De Minaur’s forceful tennis in the tiebreak, and the Aussie ran out a winner in just over two hours.

“Lately I haven’t had the best results, but it’s not like I feel like I’m playing bad tennis. I feel like my game is there. It was just about putting everything together,” said De Minaur, who reached the third round at the All England Club last year.

“A lot of effort was put into this coming training week before Wimbledon, and to really focus on Wimbledon. “It was a very tough training week, and I felt like every time I stepped out there I was training with a purpose. That purpose was just trying to be constant and having my level up here for the whole match. Not have many dips.

“It was a bit of a shaky start; I had to fight off I think maybe three break points in that first game.

“But I think a very important thing is that maybe a couple weeks back I would have been pretty negative on myself and sort of get down. But today I was just telling myself that this is the start I needed to get out all the cobwebs, start off with a tough hold and then everything else was going to go well.”

Kyrgios fell behind 5-2 in the first set against Thompson and saved two set points in the eighth game before holding for 5-3.

Emboldened, he levelled scores and ran away with the first set in the tiebreak, only for sloppy shot selection to prove his undoing late in the second set.

Kyrgios served for the third set at 6-5 and held two set points at 40-15, but missed both, and could not convert another five in the ensuing tiebreak.

On his eighth set point, he finally nabbed it, and despite suffering a complete let-down in the fourth, used his superior firepower to overwhelm Thompson in the deciding set.

Kyrgios defeated Nadal in their first ever meeting here at Wimbledon in 2014, and also won their most recent match in the second round in Acapulco five months ago.

“I’ve looked back on that moment. That’s never going to leave my tennis career. It was one of the most special moments I’ve ever had,” Kyrgios said of the 2014 upset.

“If he gets (past) Sugita … I go into that match as an unbelievable underdog. I know if I play the right type of tennis, I can have success against him.

“I have to come with the right attitude, I have to be willing to fight. If not, it’s going to be butter for him. He’s one of the best tennis players.

“I’m not going to think about it. I need to rest, recover, I have a day out, then I want to go out there and have some fun.”