Ash Barty’s French Open triumph and rise to No.1 have created a buoyant mood within the Australian tennis family, and she’s inspiring her compatriots in the lead-up to Wimbledon. 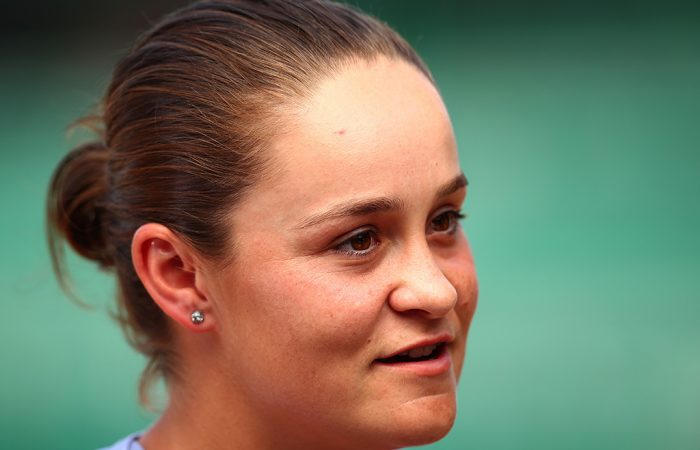 Ash Barty’s French Open triumph was groundbreaking in multiple ways. But perhaps the most notable takeaway from the 23-year-old’s Parisian triumph was the flood of congratulatory messages from her fellow tennis pros.

Few appeared happier than Australia’s players, several of whom took to social media to share their messages of excitement and pride in their countrywoman’s achievement.

Her subsequent rise to world No.1, and top seeding this fortnight at Wimbledon, have further bolstered the feel-good factor currently infusing the Australian tennis story.

Following Barty’s 6-1 6-3 win over Marketa Vondrousova in the French final, Daria Gavrilova burst out on Twitter:

“And to be fair, Nicole Pratt said ages ago that her first slam would be the French. I was like ‘This is so true’ and it’s amazing. Even today, looking at the draw and seeing her as No 1 seed, it’s just like ‘Oh, wow, this is weird.’

Asked how many more Grand Slam titles Barty might win, Gavrilova said: “Probably a few. Can’t put a number on it. Hopefully I’ll stop her somewhere in the finals.”

That might have been a light-hearted comment, but it’s not outside the realm of possibility. Gavrilova, who has been ranked in the top 20 herself, has a competitive head-to-head history with the new world No.1, snatching their Strasbourg quarterfinal in a third-set tiebreak in 2017 before Barty gained revenge with a three-set win in the Sydney semifinals last year.

As a good friend and frequent Fed Cup teammate of Barty’s, Gavrilova has seen first hand what it takes to ascend to the very top of the sport.

So has Priscilla Hon, Barty’s fellow Queenslander. “I’m so proud of her,” Hon told tennis.com.au. “I was with her when she wasn’t even playing (tennis), (she was) playing cricket and having a bit of time off. And seeing her come from that to No.1 in the world in a couple of years is amazing.

“She’s so down to earth and I was lucky enough to play with her on the doubles court this year – there are even bigger things for her that are going to come. And it’s obviously really inspiring for all of us.”

Hon often cites that doubles match with Barty – a live Fed Cup doubles rubber against the United States, which she and Barty won to send Australia into the semifinals – as the highlight of her season.

It was the first time Hon had ever played a Fed Cup rubber for Australia, with Barty’s positivity and presence on court helping settle the debutant, who ultimately served out the match to complete a straight-sets win. Hon has carried that confidence throughout a career-best season in 2019, and continues to inch towards the world’s top 100.

Gavrilova frequently refers to Barty as her “idol”. Kaylah McPhee, the 21-year-old Queenslander who this year has peaked at a career-high ranking of No.220, cited Barty as a role model.

“Being able to step on court with her (in practice) is a real pleasure. To see her have that sort of success is awesome,” McPhee told tennis.com.au after winning her first-round qualifying match at Wimbledon.

“I just think the way that she carries herself is so awesome, and I would love to be like her (laughter).”

McPhee’s warm response when asked about Barty mirrored the reaction of many of her compatriots.

“She actually once came to our restaurant with all of her cricket team,” recalled Arina Rodionova, who went on to qualify for Wimbledon. “She was always very humble and very nice girl, so she deserves (her success) more than anyone.

“She’s just so good at tennis, she’s so talented and she’s fit. She deserves to be No.1 for sure and I hope she’s gonna stay there for a long time. I hope in doubles as well – she’s really good at that too (laughter).”

There’s been a similar response to Barty’s success among Australia’s men.

Congrats @ashbar96 nothing changed, you were dominating juniors and now winning slams. pic.twitter.com/D6t902DKxs

Although the men’s and women’s tours intersect for, roughly, just half of the tennis season, it certainly did not prevent our top male players from witnessing and reacting to Barty’s breakthrough in Paris.

Alex de Minaur, Nick Kyrgios, John Millman, Thanasi Kokkinakis, Alexei Popyrin, James Duckworth and John Peers were among those jumping on Twitter to send out their messages of congratulations to the nation’s newest major champion.

Barty’s success appears to have created a buoyant feeling throughout the Australian tennis fraternity.

“All the interviews I’m reading, she’s always saying how great her team is; I think that just sums up the type of person she is,” Jason Kubler told tennis.com.au during his run to the final round of Wimbledon qualifying.

“I think of regardless of what she does in tennis – and I honestly believe she’s gonna do pretty darn well in tennis, not that she hasn’t already (laughter) – she’s just a cool chick. We always have conversations when we see each other and it’s very easy.

“I think it just shows how mentally strong she is, how down to earth she is, and I couldn’t be happier (for her). It couldn’t have happened to a better person.”

Added Popyrin, during his successful week at Roehampton: “I remember her training in Sydney and I was one of the juniors and I would watch her play sometimes. She’s had an unbelievable year so far and it’s only going to continue in my eyes. I think she’s favourite for Wimbledon.

Happiness as a result of her achievements is one thing. Taking inspiration from them is another.

Wally Masur, Tennis Australia’s Director of Performance, believes Australia’s women – many of whom have played and trained with Barty at some point – will have gotten a kick out of her success and seen up close the exacting on- and off-court approach Barty takes to her tennis career.

Astra Sharma, part of Australia’s Fed Cup team which this year has stormed into its first final since 1993, confirmed this.

“I think whenever you’re on close terms with someone, train with them, and know them, when they move up you can’t help but be swept up with them,” said the West Australian, who was part of Australia’s winning squad against the US in February.

“Because you’ve just been in that arena with them and it gives you a bit of belief, like, hey, I’m not that far away. It doesn’t take that much to go to the next level, because you’re always in touching distance.

“It gives I think a lot of belief to the Australian girls; we can hopefully follow in her footsteps a bit.

“Ash is a different level – she has skills that a lot of girls just don’t. The level of difficulty of what she’s doing is incredible, but at the same time, it’s the basics that she has really mastered, and that’s a lot of respect right there.”

Fellow Australian No.1 Alex de Minaur, ranked 29th on the ATP Tour, is also keenly aware of what his countrywoman is achieving.

The Newcombe Medal has been shared for the first time as Ash Barty and Alex de Minaur are rewarded for stellar 2018 seasons. #Newks18 #tennis (Pic: AAP) https://t.co/LAbkOYsZsj pic.twitter.com/CI8gX64zMQ

Recently returning to to the court after an injury-marred few months, he admits her success has tapped into his competitive drive.

“It’s probably one of the best comebacks in tennis history,” said the Sydneysider, who shared Newcombe Medal honours with Barty in late 2018.

“I’ve got nothing but nice things to say about Ash; she’s incredible, she’s always been nice to me, and she’s the same as she was three years ago, so that’s really amazing to see.

“I think Aussie fans have been waiting for someone like Ash, and they deserve that. Now it’s time for us guys to try and keep pushing, keep pushing off each other, keep helping each other out.

“Because the only thing that this has made me feel is a hunger, even hungrier to get better and keep rising up the rankings.”