Nick Kyrgios and Jordan Thompson face off in an all-Aussie first-round affair at Wimbledon, with the winner expected to face No.3 seed Rafael Nadal. 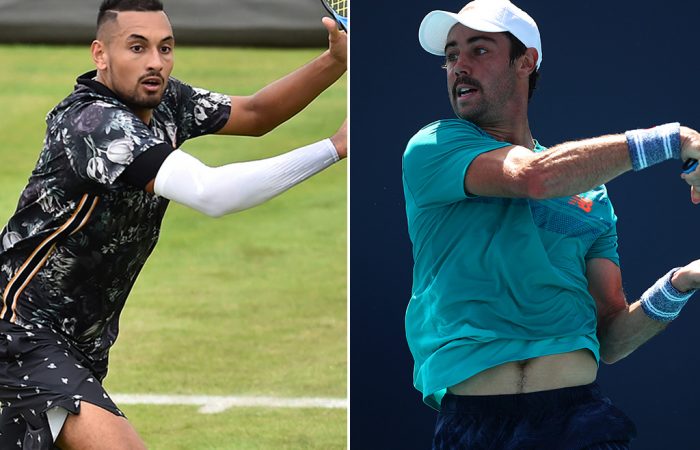 Nick Kyrgios and Jordan Thompson will go head-to-head in the first round of Wimbledon, with the reward for the winner a likely date with third seed Rafael Nadal.

Australia’s No.1 man, Alex de Minaur, is seeded 25th and first takes on former world No.16 Marco Cecchinato, who comes into the tournament on a four-match losing streak.

De Minaur, who beat Cecchinato in the first round here 12 months ago, faces a projected third-round meeting with eighth seed Kei Nishikori.

Also in the bottom half of the draw with De Minaur, Kyrgios and Thompson are Matt Ebden – who plays 24th seed Diego Schwartzman – and Bernard Tomic, who has drawn former world No.5 Jo-Wilfried Tsonga. John Millman is also in there and takes on Bolivia’s Hugo Dellien in round one.

The only Australian in the top half – and thus playing on Monday – is teenager Alexei Popyrin, who qualified for the main draw on Thursday. He opens against Pablo Carreno Busta for a likely shot at No.11 seed Daniil Medvedev in round two.

Kyrgios v Thompson has plenty of appeal, given Kyrgios’ grasscourt credentials and Thompson’s form on the lawns.

Up to a career-high ranking of 45th, Thompson has won six of eight grasscourt outings in 2019, advancing to the ATP final in ‘s-Hertogenbosch and backing that up with a semifinal run this week in Antalya, Turkey.

Kyrgios, slightly above Thompson in the rankings at No.43, last year reached the Queen’s and Stuttgart semifinals and has a great record at Wimbledon, having three times progressed to the second week.

The first of those was in 2014, when he famously stunned Nadal on Centre Court in his first meeting with the Spaniard to win through to the quarterfinals. He also won their most recent match, a torrid three-set affair in the second round of Acapulco earlier this year.