Nick Kyrgios - who next faces Rafael Nadal - and Alex De Minaur join fellow Aussie John Millman in the second round of the ATP tournament in Acapulco after straight-sets wins on Tuesday night. 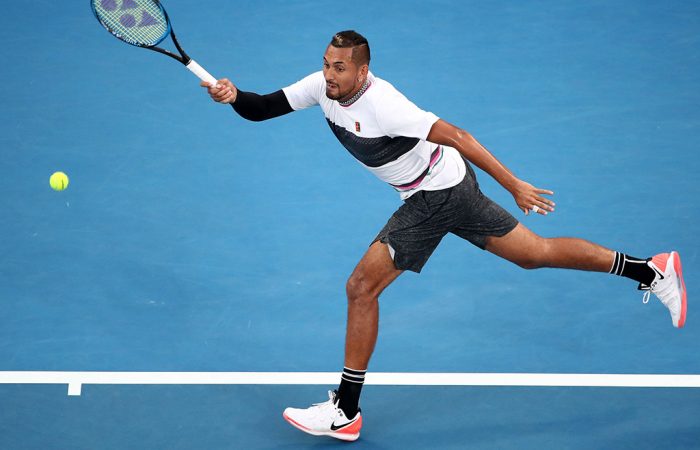 Nick Kyrgios has eased into the second round of the ATP 500 tournament in Acapulco with a 6-3 7-5 win over Andreas Seppi.

Also moving through was Alex De Minaur, who won a tighter 7-6(5) 7-6(2) battle over Nicolas Jarry of Chile.

Kyrgios surged to a 6-3 4-1 lead and withstood a late fightback from the Italian veteran to win in 73 minutes.

Kyrgios’ second-round opponent is No.1 seed Rafael Nadal – after the Spaniard got past Mischa Zverev in straight sets – while De Minaur, the fifth seed, next tackles either Feliciano Lopez or Dusan Lajovic for a place in the quarterfinals.

After John Millman’s victory on Monday night, Kyrgios and De Minaur become the second and third Aussies respectively through to the last 16 at the Mexican hard-court event.

Their other compatriots, however, suffered losses on Tuesday.

One of the points of the year.

Not to be for @AlexeiPopyrin99 but boy that was next level 👏 #GoAussiespic.twitter.com/tENXtnIHMR

At the Dubai Tennis Championships, Matt Ebden took a set off Stefanos Tsitsipas but the world No.11 proved too good for the Australian in their opening-round encounter.

Two days after he lifted the trophy in Marseille, Tsitsipas overcame world No.47 Ebden 6-4 3-6 6-3 to record his 12th win in 16 tour-level matches this season.

Greek 20-year-old Tsitsipas, who reached the Australian Open semifinals last month, won 92 per cent of first-serve points to claim victory after one hour and 43 minutes.