Australia has built an unassailable 3-0 lead over Bosnia and Herzegovina in Adelaide, sending them through to the Davis Cup finals in Madrid in November. 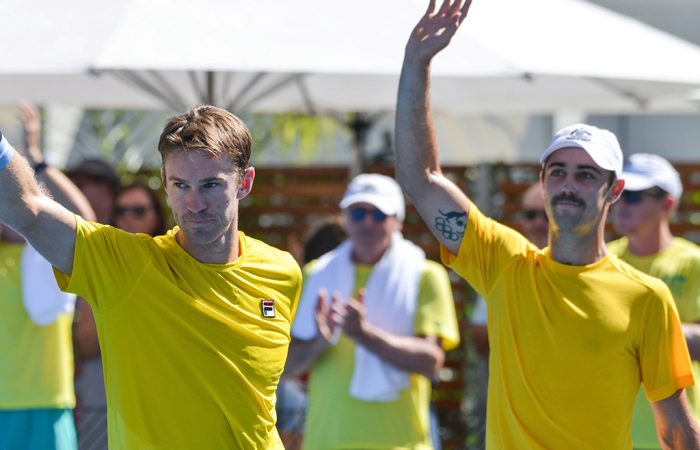 Australia have defeated Bosnia & Herzegovina 4-0 in its Davis Cup qualifying tie in Adelaide to secure a spot in this year’s finals.

Australia’s doubles pair John Peers and Jordan Thompson defeated Mirza Basic and Tomislav Brkic 7-5 6-1 on Saturday at Memorial Drive in Adelaide to give the hosts an unbeatable 3-0 lead.

“It’s a great feeling playing for your country and having the name of your country on your back – there’s no greater honour,” Thompson said.

“He (Peers) goes alright (smiling). He’s won a Grand Slam, made the final of another. He’s not bad to play wiht (laughter).”

Peers revealed his run to the recent Australian Open final was a confidence booster coming into the tie.

“It’s always great coming into a week like this playing a lot of matches,” he said.

“Even if not, the boys will get plenty of work done and (you) feel good definitely come match day. I know Rusty (Lleyton Hewitt) does a great job with the boys in always feeling good come match days for Davis Cup and it always helps the rest of the year.”

The Australians advance to the the revamped finals of the cup, featuring 18 nations and to be held over one November week in Madrid.

Peers and Thompson steamrolled their opponents after a tight opening, when they achieved the set-winning break of serve in the 12th game.

The hosts rode their momentum in a commanding second set to bank a third consecutive win.

“These boys have taken it to another level now,” Australia’s captain Hewitt said of his triumphant team.

“I had full faith in these guys. The finals are a long way away … but, come November, no matter what the format, we’re going to go there and give it absolutely everything we have got.”

After the doubles, Alexei Popyrin made his debut for Australia, playing the dead fourth singles rubber.

The fifth rubber was not played.