Australia take a 2-0 lead against Bosnia and Herzegovina in their Davis Cup tie, winning both singles matches in Adelaide. 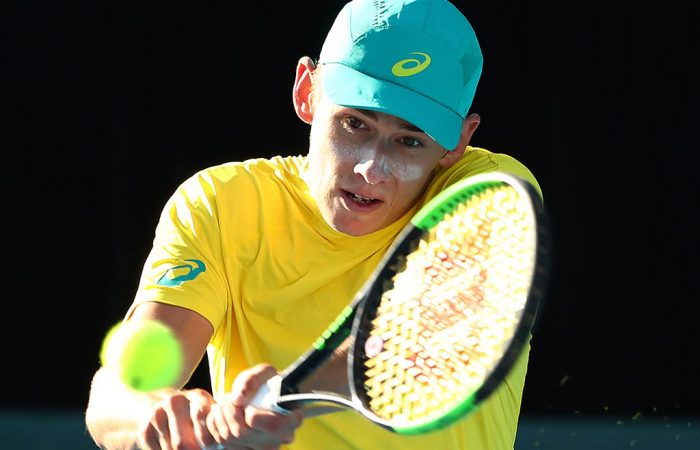 John Millman and Alex de Minaur delivered Australia a 2-0 stranglehold lead on day one of their Davis Cup tie against Bosnia and Herzegovina.

De Minaur followed with a 6-3 7-6(0) victory against Mirza Basic ahead of a doubles rubber and reverse singles on Saturday.

“This is a dream come true for me and I’m so happy I was finally able to get a win for my country in Davis Cup,” said De Minaur, who had lost his first three Davis Cup singles matches.

“I think it’s amazing that we had Johnny Millman come out here and get his win as well, opening it up perfectly and giving me lots of confidence. I’m really happy with the position we’re in.”

Australia are now in the box seat to win the tie and secure a spot in the finals of the revamped competition.

The winners of 12 qualifying ties around the world this weekend join six automatic qualifiers for the finals to be played over one November week in Madrid.

Millman gave Australia the perfect start with a 71-minute belting of world No.52 Dzumhur, before De Minaur eclipsed Basic in 87 minutes to put the host nation on a roll.

The world No.36 felt the emphatic performances were evidence of team captain Lleyton Hewitt’s demands for the Davis Cup to return to prominence in Australia.

“It’s no secret that Lletyon wants to create a real culture where Davis Cup is one of the benchmarks of the year,” Millman added.

“The opportunity to represent your country, as it was back in the old days, is something that we don’t take for granted. I’m all for that. It always should be like that.”

Australia will look to wrap up the tie on Saturday, when they need one point from the remaining doubles and two reverse singles rubbers.

John Peers and Jordan Thompson are scheduled to take on Basic and Tomislav Brkic in the doubles.

“It’s all about recovery,” said Hewitt. “Johnny and Alex have got to do all the right things and then we start focusing on tomorrow afternoon.

“[Peers and Thompson] have been hitting the ball great all summer, they deserve to be out here tomorrow and they’ll do absolutely everything.

“But the rest of the boys have to be ready to play the reverse singles as well. It’s certainly not finished, we’ve got a lot of hard work still to go.”