Wildcard Alex Bolt has scored the biggest result of his career with a five-set upset win over 29th Gilles Simon on an atmospheric Court 3 at the Australian Open. 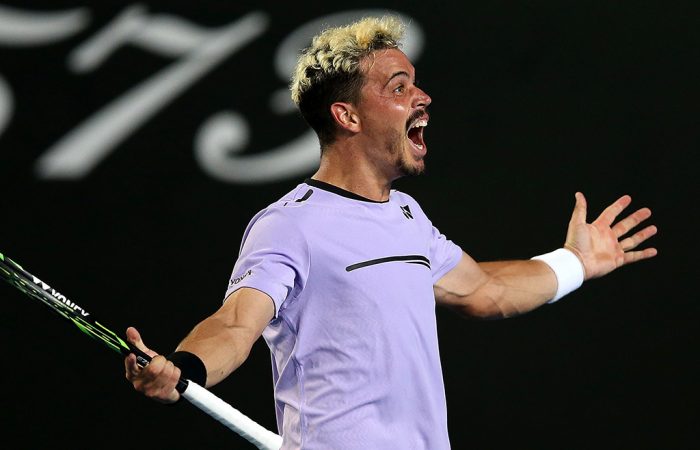 Wild-haired wildcard Alex Bolt has given Australia its best start to the Australian Open in 15 years with a pulsating second-round win over veteran Frenchman Gilles Simon.

“This is the best thing I have ever experienced in my life,” the world No.155 said. “It is unbelievable to have everyone behind me tonight. They really got me over the line.”

With fellow wildcard Alexei Popyrin getting past 2018 French Open finalist Dominic Thiem, who retired trailing by two sets earlier on Thursday night, Australia has five men and women in the last 32 at Melbourne Park for the first time since 2004.

“I think we are in a pretty good spot. Hopefully some of us can win another round and go deeper into the tournament,” Bolt said.

The 26-year-old, who took a break from tennis three years ago to work as a labourer with his brother, had never before beaten a player ranked inside the top 70.

“My parents have come over from Murray Bridge. To be able to perform like this in front of them is real special,” he said.

LOVE THIS GUY! Alex Bolt didn't realise he had to do a post-match interview. 😂😂

The last group of five Australians to make the third round was Mark Philippoussis, Lleyton Hewitt, Todd Reid, Nicole Pratt and Alicia Molik.

Bolt will meet either German fourth seed Alexander Zverev or Frenchman Jeremy Chardy for a place in the fourth round.