Australian teenager Alexei Popyrin is through to the third round of the Australian Open after No.7 seed Dominic Thiem retired early in the third set of their match at Melbourne Arena. 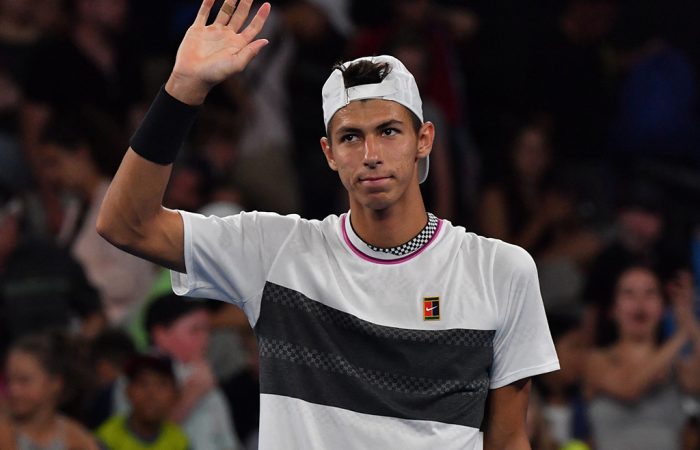 Another Australian teen sensation Alexei Popyrin is into the third round of the Australian Open after Dominic Thiem retired midway through the third set of their Melbourne Arena clash.

The 19-year-old surprise packet was well on top before the Austrian seventh seed and 2018 French Open finalist called it quits while trailing 7-5 6-4 2-0.

Thiem, who had a five-set first round win, called for the trainer midway through the second set citing general fatigue.

“I would say (I became aware of his struggles) somewhere in the middle of the first set when I saw he wasn’t serving as strong as he usually is, when he was serving 150, 160. I saw that something was really wrong and I needed to take advantage of that.

“I just tried to keep focused.”

Wildcard Popyrin, who had only played one Grand Slam match before this tournament – at Australian Open 2018 – looked fearless.

The roar of the crowd tells Popyrin the story! He's sitting down before the challenge is over.

2 sets to the Aussie.

Using his big forehand weapon, Popyrin hit almost double the winners of Thiem, who looked sluggish from the outset.

Despite standing 195cm tall, Popyrin showed impressive speed around the court as he pressed the tiring Thiem.

Popyrin said he felt in control after wrapping up the second set.

“I always thought that I was in the match to be honest but when I won the second set is when that thought really kicked in and that I could actually win the match,” he said.

“I didn’t really feel much pressure, to be honest. I just wanted to go out there and enjoy the moment, just soak in the experience really.

“And the crowd was amazing, like always. The Aussie crowd are the best crowd.

“I really enjoy playing on these big, big stadiums with massive crowds. So, yeah, it’s just a great experience really.”