Alex De Mianur made a happy return to the tournament where he made his first ATP final last year before Sam Stosur overpowered Dominika Cibulkova in an impressive display under lights. 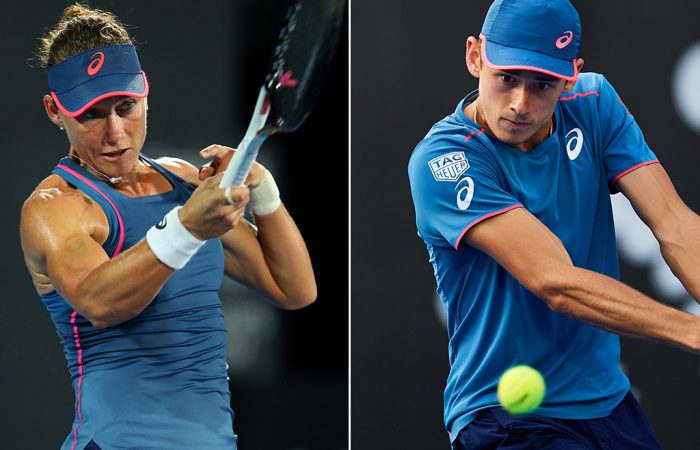 Sam Stosur snapped a seven-match losing streak with a resounding performance against Dominika Cibulkova on Monday night to reach the second round of the Sydney International.

Playing under lights at Ken Rosewall Arena, Stosur recovered to win 3-6 6-3 6-4 after fellow Australian Alex De Minaur had wrapped up a straight-sets win over Dusan Lajovic on the same court.

De Minaur, who reached his first ATP final at Sydney Olympic Park 12 months ago, will next face towering American qualifier Reilly Opelka in the last 16.

Stosur, meanwhile, won her first match since August’s Connecticut Open in New Haven, a victory that extended her head-to-head dominance to 6-2 over Cibulkova.

This was their first ever match that extended to three sets, and it saw Stosur at her free-swinging, aggressive best; she crunched 15 aces among 44 winners and won 77 per cent of her first-serve points, while Cibulkova managed just 24 winners.

“I thought I played better and better as the match went on.”

Stosur lost her first-round match in Brisbane last week, the fourth time in the past five years she has lost her opening hit-out at the Queensland tournament.

Sydney, however, has proven a happier hunting ground; Stosur has won five of her past eight matches at Sydney Olympic Park, advancing to the quarterfinals in 2016.

Ebden, ranked more than 30 places higher, began strongly, but the 80th-ranked Argentine staged a comeback to run out a 3-6 6-3 6-4 winner.

He advances to a second-round meeting with No.1 seed Stefanos Tsitsipas.

De Minaur returns with a win

Earlier, De Minaur admitted it would be a “dream” to win his first senior title in Sydney this week.

The Australian No.1 continued his warm-up for the Australian Open by beating Lajovic 6-4 6-3, a match during which he was made to work hard by the Serbian world No.45.

The 19-year-old also had to deal with over three hours of rain delays.

Back in business!@alexdeminaur opens up his 2019 #SydneyTennis campaign with a 6-4 6-3 victory against Dusan Lajovic.

“First match of the tournament is always hard work, especially against a high-level opponent like him. He’s had some quality wins and played some exceptional tennis,” De Minaur said.

“It wasn’t easy all day, a lot of waiting around, especially coming in so early and the weather not permitting us to go out and play.

De Minaur, who rose to world No.29 on Monday, was a finalist in his home town last year and will aim to go one better after defending champion Daniil Medvedev withdrew on Monday.

Medvedev, who lost to Kei Nishikori in the Brisbane final on Sunday, beat De Minaur in last year’s final and the pair looked destined to meet again in the Sydney quarter-finals this week.

But the Australian will now meet American qualifier Reilly Opelka in the second round on Tuesday before a possible final-eight clash with compatriot Jordan Thompson.

De Minaur was reluctant to get carried away, but said it would be “insane” to claim the final Sydney International title as his first title.

Greek world No.15 Stefanos Tsitsipas is the favourite to take out the men’s title.

“It would be insane. Honestly it would be like a dream come true, but we are still far away from that. I have my second-round opponent, which is a very tough one,” the Australian said.

“I can’t look too far ahead. (I’m) struggling just to stay in the present. You can’t look in the future and can’t dwell on the past. It’s all about the present and what you do each day.

Earlier on Monday, De Minaur’s countrywomen Daria Gavrilova and Ajla Tomljanovic went down in the opening round.

A frustrated Gavrilova has vowed not to be a “good girl anymore” when she enters next week’s Australian Open without a win through the summer.

A week after losing her first match in Brisbane, the Australian No.2 fell in a 0-4 hole early in her round-one match against Yulia Putintseva at the Sydney International and couldn’t recover.

She looked a broken figure when she rolled her ankle and had her serve broken early in the second set, but the world No.35 showed some fighting spirit to force a tiebreaker.

“It sucks. I always want to win, but the start of the season is not great. I felt like I was really off today. In the first set, I wasn’t myself,” Gavrilova said. “I felt like that was the same last week.

“Obviously the Grand Slam is next, so hopefully I will find the Dasha that everyone knows and be up and about.”

Gavrilova followed wildcard Tomljanovic out of the tournament; the Queenslander fell 6-3 6-3 to Italian world No.27 Camila Giorgi earlier on Monday.

Tomljanovic was down 2-1 when both players went back to the lockers due to another rain delay and when play resumed, she was unable to make any headway into Giorgi’s serve.