Both are working their way back up the rankings, and now James Duckworth and Luke Saville will clash in the AO Play-off final with an Australian Open main-draw wildcard on the line. 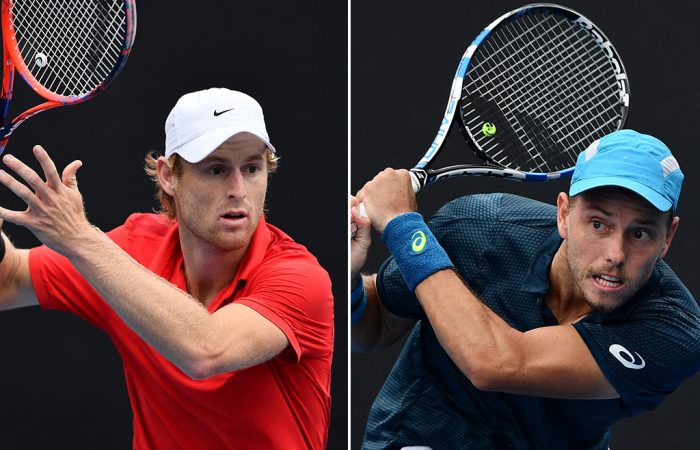 James Duckworth and Luke Saville will aim to take a major step in their respective comebacks when they battle on Sunday for a prized Australian Open main-draw wildcard.

Duckworth overcame the loss of the first set to win his AO Play-off semifinal over Maverick Banes, after Saville shocked in-form No.1 seed Alex Bolt 6-2 6-4 6-1.

Saville, once ranked as high as No.152, is currently ranked 476th and looking to work his way back to his form of 2015, when he advanced to the second round of Wimbledon as a qualifier as well as reaching two ATP Challenger finals.

“I’ve been pretty happy with my game and I’ve been playing well. I’ve done some good work leading into the tournament and happy to be playing off for a wildcard – it’s good,” Saville told tennis.com.au.

“It’s a massive prize on offer … everyone loves playing the home Grand Slam, the Aussie Open is as good as it gets. Really looking forward to Sunday.”

Playing a good friend, Saville was conscious of the fact Bolt was struggling physically, especially in the third set. Also not helping mental matters was the fact very light rain began falling when he was controlling the match up two sets to love.

“I was really happy with my serving performance again. I made a lot of returns, built a lot of pressure, and I think Bolty faded away at the end a little bit there, but I think maybe a little bit of injury was bothering him a little bit,” Saville observed.

“But (that was) probably partly due to me putting in a good first couple of sets and putting those doubts in his mind.

“There were a few drops there are well, a little bit of rain coming … it makes you a bit antsy, but you just have to try and focus on point by point. Fairly clichéd, but don’t get ahead of yourself. I just kept on doing what I was doing to get in that position and it paid off in the end.”

Duckworth’s win was not as straight forward as Saville’s; the second seed lost the first set and was pushed to the brink in the second before eventually exerting his control over the match.

He brought up match point with an overhead winner and sealed victory after a long rally when Banes eventually missed a forehand into the net – not long before another downpour washed over Melbourne Park.

The former world No.82 – who underwent five surgeries from January 2017 to January 2018 – was still not completely satisfied with his level, but was thrilled to reach this stage of the Play-off.

“There’s still a little way to go (in terms of my quality of tennis); I think trying to play a complete match is what I’m sort of looking for. I thought I started off a little bit slow, whether that was me or due to Mav playing well, the first set and a half he was probably the better player,” Duckworth said.

“Then I managed to turn it around … I felt I used a bit more variety, which helped me. Mav, when he gets into a rhythm, is pretty good – he doesn’t miss much. Dictating with the forehand quite a bit. So I tried to nullify that as much as possible, use a bit of slice, a little variation.

“I’m really excited to have an opportunity to play for that main draw spot. The Australian Open is my favourite tournament; the support you get as an Australian playing in the main draw here is incredible and it’s something I’d really love to experience again.”

Duckworth leads the head-to-head series with Saville 2-0, winning their first-round qualifying match at this year’s ATP Challenger event in Cary and also winning a meeting in the Traralgon junior tournament back in 2009.

Both victories came in straight sets, but Duckworth is wary of the threat Saville presents.

Added Saville: “We all know each others’ games inside out really. Ducks is a quality player – he’s been top 100. A few injuries have put him back outside. He’s obviously a very good player.

“I’ll go in as the underdog but I don’t mind that tag – I just wanna go out there and dig in, play another good match, serve well and I think I’ll give myself the best chance if I do that.”