Sixteen of Australia's most promising female tennis players are this week taking part in a skills development camp in Melbourne - with former star Casey Dellacqua lending her expertise along the way. 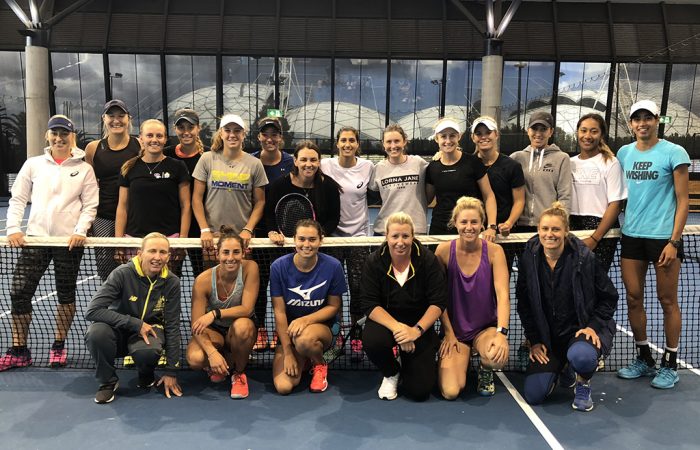 Many of Australia’s best and brightest female tennis prospects are this week honing their games during a WTA training camp at Melbourne’s National Tennis Centre.

Accompanying them is former Australian great Casey Dellacqua, who since retiring earlier in 2018 has moved into the player development space.

The West Australian hopes she can assist the 16 players – including rising stars Destanee Aiava, Jaimee Fourlis, Ellen Perez, Astra Sharma and Zoe Hives – taking part in the camp in their quest to crack their elite top 100.

“I’ve kind of had a theme with the girls this week, and that’s been volume – in terms of being on the court and concentrating for a length of time, hitting a lot of balls and giving them a picture of what top 100 looks like, and the level they need to perform at on the practice court, day in and day out, to reach top 100,” Dellacqua explained.

“For a lot of them, they haven’t played at that level. So I’m just trying to create a sense of what is needed to be one of the best in the world. Hopefully they take something from it this week.”

The camp comes at the perfect time in the tennis calendar; it follows the recent six-tournament Australian Pro Tour swing and precedes the Australian Open Play-off, set to take place in early December.

It serves as an intensive training and development block in between those two periods of invaluable competition, and Nicole Pratt – Australia’s head of professional women’s tennis – believes the camp can help the athletes consolidate their gains in what has been a fruitful season for our female players.

“Our numbers are really strong – we’ve got four players inside the top 100. And it’s obviously great to have someone like Dasha (Gavrilova) at the camp participating in doubles day,” Pratt said.

“Probably the number we’re most proud of as a team is how many players now we have ranked between 100 and 250. We’ve had 10 players ranked within that ranking category and our next big push is to try and get some of them inside the top 100. It’s a really exciting time and I do think that’s going to happen over the next 12 months.

“I think it’s critical (to have involvement from players like Casey). Integrating a past player or recently-retired player is something we’ve been trying to implement within all of our programs; not only do they bring such value on the court but it’s actually more (about the things) off the court, and talking about their experiences, their journeys.

“Someone like Casey has had such a successful career, a long journey, it’s had its ups and downs. And because of Casey’s natural openness as a person, she’s sharing those stories with the girls, and that’s invaluable.”

Dellacqua said the players this week had been interested in hearing about her career experiences; understandable, given she was a top-30 singles players and cracked the top five in doubles. They also peppered her with questions during her presentation regarding her doubles tactics when she partnered with Ash Barty.

“Growing up I used to do a lot of camps … they kept me playing, I was with my friends,” Dellacqua said.

“Bringing the girls together I think really just creates a nice team camaraderie. When they’re on the road they can share accommodation, they get to know each other better. Even from a practice perspective, playing with different players every day (during the camp) adds an element of variety.

“I’ve been pleasantly surprised, to be honest, at their level of tennis, their level of professionalism. And if I can just instil a few things that will help them get to that next step, I think then hopefully I’ve done a good job.”