Three Aussies take up six places in a loaded wedge of the ATP Citi Open draw in Washington DC while Thanasi Kokkinakis returns to Los Cabos in Mexico where he was a finalist in 2017. 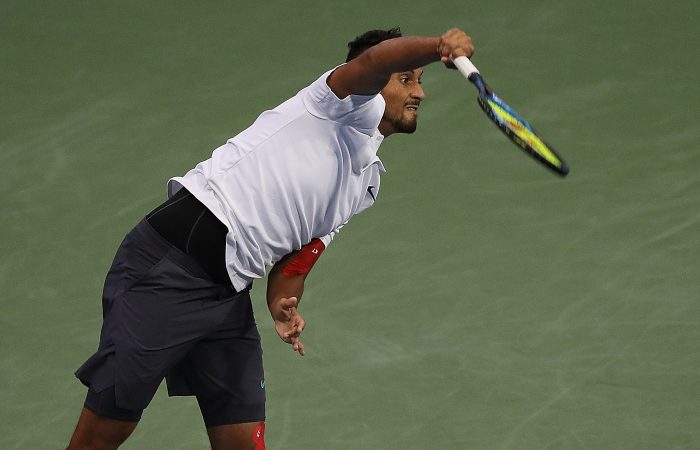 Kyrgios is the fifth seed at the ATP 500 event in Washington DC and receives a first-round bye; he could face James Duckworth in the second round should Duckworth get past American qualifier Thai-Son Kwiatkowski.

In the last 16 Kyrgios is projected to meet 10th seed Stefanos Tsitsipas, who will face the winner of the Jordan Thompson-Jared Donaldson match in round one.

That Aussie trio sit in the top half of the draw. In the bottom half, Alex De Minaur opens against Canadian Vasek Pospisil for a shot at 11th seed Steve Johnson, while Alex Bolt – who qualified for the main draw – faces wildcard Tommy Paul.

The winner of that match progresses to a second-round meeting with 16th seed Andrey Rublev.

The Washington DC men’s draw is headlined by top seed and defending champion Alexander Zverev and No.2 seed John Isner, who arrived fresh off another winning week in Atlanta.

At the WTA event in DC, Victorian Olivia Rogowska has entered the main draw and will tackle Poland’s Magda Linette.

The winner faces a likely second-round meeting with third seed Naomi Osaka, should the Japanese get past dangerous lefty Bernarda Pera.

Across the country in California, Ajla Tomljanovic will take part in the inaugural Silicone Valley Classic in San Jose,

San Jose, which replaces the long-running Stanford tournament, is a Premier-level tournament on the WTA calendar.

Tomljanovic, ranked 62nd, opens against a qualifier and should she win she would move through to a second-round meeting with No.2 seed Madison Keys.

Further south in Mexico, Thanasi Kokkinakis and Bernard Tomic are the two Australians in the main draw of the ATP 250 event in Los Cabos.

Kokkinakis, a wildcard entry, reached the final last year and will hope for a similarly-strong showing in 2018 when he plays No.7 seed Taylor Fritz in the first round.

Sydneysider Aleksandar Vukic is one win away from joining Kokkinakis and Tomic in the main draw; he beat fellow Aussie Jacob Grills in the first round of qualifying and faces second seed Mohamed Safwat of Egypt in the final round.