On Thursday, Jason Kubler and Alex Bolt qualified for Wimbledon for the first time in their careers while John-Patrick Smith put in another impressive display at Roehampton to join them in the main draw. 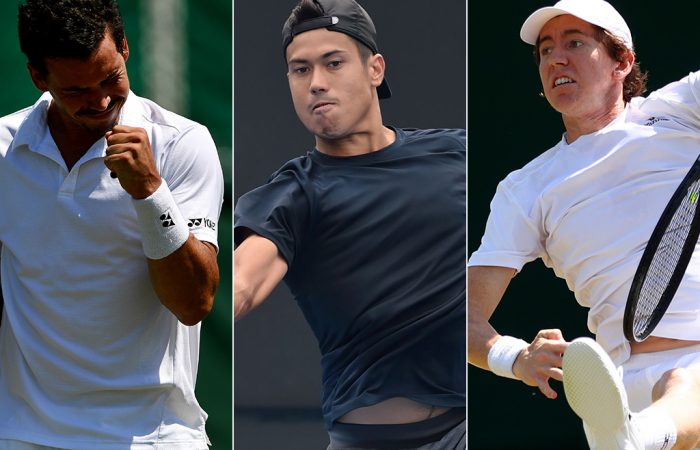 Australia’s troupe at Wimbledon has been boosted by three after Jason Kubler, Alex Bolt and John-Patrick Smith won their final-round qualifying matches at Roehampton.

Unfortunately, Bernard Tomic and Thanasi Kokkinakis were unable to join them in the main draw; Kokkinakis fell to Bolt in a four-set all-Aussie affair while Tomic exited in straight sets to Ruben Bemelmans, physically hampered throughout the match.

We have a second Aussie qualifier @wimbledon, with @abolt15 getting past Kokkinakis 7-6(6) 7-6(4) 4-6 7-5 to reach the main draw for the first time! #GoAussies pic.twitter.com/JzHJIJFcHn

The other other time Bolt came through three round of Grand Slam qualifying was at Australian Open 2017, in his first month back on tour after his hiatus.

“(I) came back at the start of 2017, and then two years later I’m qualifying for Wimbledon (laughter). Would never have dreamt of this in my life,” he said.

“I didn’t know what to do (on match point). I just hit the volley and hit didn’t go for it and I just collapsed. I felt like I lost control of my whole body (smiling).

“It’s always tough playing one of your mates. He’s probably one of my best mates on tour, I keep in touch with him a lot; we basically talk every day. It was tough playing against someone like that but I’m pretty grateful for the win.”

Kokkinakis was shattered after the loss, but paid tribute to his countryman and friend.

“If I lost to anyone I’m happy it’s him,” Kokkinakis said.

“I thought I was on top the whole match (but) I got tight in the big moments. I was up a break in the first, I was on top of him in the second, won the third and then was up 3-1 with two points for a double-break in the fourth, and I didn’t take it.

We have our first qualifier! @jpatsmith beats Michael Mmoh 6-2 6-4 6-3 to seal a place in the @Wimbledon main draw! #GoAussies pic.twitter.com/pN4PFysxAw

It is the second time Smith will arrive at the All England Club via the qualifying rounds; he last did so in 2015.

“I think this is probably my best level right now. Had a tough first round, played really well in the second round and then today didn’t lose a set, so pretty confident entering Monday or Tuesday (at Wimbledon),” said the world No.211.

“I think maybe (I’m) serving better, a little smarter. Volleying with a little more finesse, bringing them in, moving them back. All the little things, I think I’m doing better (this year).

“I think this is better (in terms of achievement compared with 2015), because last year I lost 12-10 in the fifth, so this is kind of like a consolation prize (laughter). Last year was such a heart-breaker.

The last time Australia had three players qualify for @Wimbledon was three years ago. In 2015, Smith, Saville and Millman reached the main draw.

Kubler held two match points on Polansky’s serve in the 12th game of the third set and another on his own serve in the tiebreak at 6-5 – only to double fault.

But he broke early in the fourth and gritted his teeth through a quad cramp late in the match to complete a satisfying victory.

“I’ve come from not really knowing if I was going to continue playing tennis, to qualifying for Wimbledon. So it’s a big jump and I’m pretty happy,” said the Queenslander, whose knee troubles have been well documented.

“(Didn’t think I’d be) qualifying at any slam. Never got past the second round, and that was only once, here. So it’s unreal. I’ve had probably the best 12 months of my life.

“I’ve had the two (main draw) wildcards (at the Australian Open) … but when I’m going to Wimbledon now I’m going to feel like I belong there. Not saying that I didn’t feel like that in Australia … (but here I’ve) gone through the hard yards. (Won) 12-10 in the second round and now (today in) four sets.

Kubler, Bolt and Smith’s first-round opponents are yet to be determined; the main-draw ceremony will take place at the All England Club on Friday morning (London time).

Yet whoever they play, it’s been a fantastic week at Roehampton for the Aussie trio. And their Wimbledon campaigns are certainly not over yet.

“Who knows?” Bolt said when asked how he thought he’d fare in the main draw.

“I’m just gonna go out there, give it my all, and if I play like that, I’m sure I’ll give anyone a run.”