It was a great start for Australia on Day 1 of Wimbledon qualifying, with Thanasi Kokkinakis, Bernard Tomic, Alex Bolt, Jason Kubler and JP Smith reaching the second round. 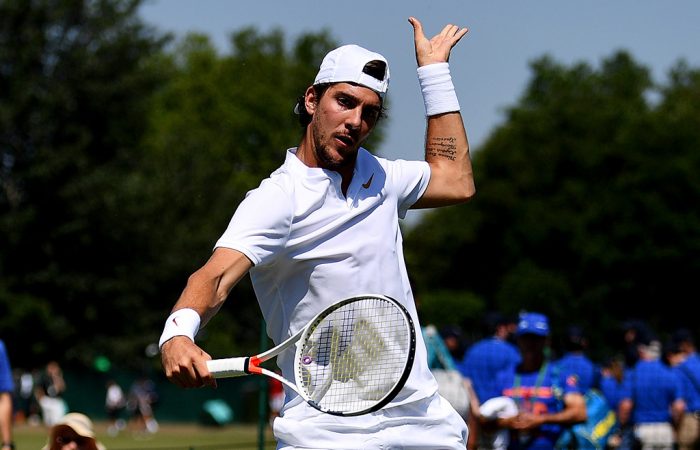 Bernard Tomic and Thanasi Kokkinakis are through to the second round of qualifying at Wimbledon after contrasting wins on Monday.

Joining them in the second round were Alex Bolt, Jason Kubler and John-Patrick Smith, yet Marc Polmans suffered a heart-breaking defeat, missing four match points – all when receiving serve – in a 6-3 4-6 8-6 loss to Matthias Bachinger.

Back in 2011, Tomic came through the qualifying rounds and ultimately went on to reach the quarterfinals at just 18 years of age.

He’ll now take on Tomislav Brkic, who ousted fellow Australian Akira Santillan 6-3 7-6(7), for a spot in the last round of qualifying.

“Absolutely (this tournament has special memories for me). Played so many times third round, fourth round here, one time quarterfinals,” said Tomic, who felt the grass courts were playing quicker – and to his liking – in 2018.

It was a tougher day out for Kokkinakis, who flirted with an exit before dispatching world No.140 Marcelo Arevalo.

The injury-prone South Australian dug deep after losing the first set and going to a tie break in the second before prevailing 3-6 7-6(3) 6-4.

“I wasn’t sure if I was going to play a couple of days ago,” admitted Kokkinakis, who is making his way back from another physical setback after injuring his knee in Monte Carlo and missing six weeks of competition.

“I just went point by point and hopefully the body held up. Yeah, it was ugly, but I got there in the end, so I’ll take it.

“(I was) very close (to not playing). It was kind of a game-time decision, a little bit. I’m pretty sore; I did something to my quad a little bit a few days ago so I think I strained it. But grass is OK, you can kind of get away with it.

“I’ve booked my house for three weeks which is a bit ambitious (laughter).”

Bolt, who will team with Lleyton Hewitt in doubles at Wimbledon, takes on Alexander Ward in round two.

“Halys is a very good player. You can’t take someone like him lightly with the power and weapons he has,” Bolt said after improving his head-to-head against the Frenchman to 2-0.

“I played him last year on the grass in Ilkley, so I kind of had a gauge of how it was going to be.

“I’m happy I’m playing good tennis on the grass. I grew up playing in Murray Bridge (in South Australia) on the grass courts down on the river, so I’ve been playing on it since I was five. I feel really comfortable moving and playing on this stuff.

“(There’s) the belief and confidence in myself to go out there and execute what I want to do, and with that, everything is sort of coming together and I’m starting to play really good tennis.”

Kubler’s 6-1 6-2 win over the Belgian sends him through to a second-round meeting with No.26 seed Adam Pavlasek.

The 25-year-old has won four of his last five matches on grass; last week he advanced to the semifinals of the Ilkley Challenger.

“Today I played pretty well. I was a little bit nervous going into the match, because I finished on the Saturday (in Ilkley), so then I was under impression qualies was Monday/Tuesday, so I was like, I get a Tuesday start,” Kubler said.

“(After I realised I was playing on Monday) I was talking with my coach and we were saying is it better to feel the courts or is it better almost to get the body refreshed and be ready and just trust you’re feeling the ball?

“We had the day off. (It) paid off, served well, and I’m pretty happy right now.”

In other results, John-Patrick Smith made it five Australian wins on Monday with a thrilling 6-7(5) 6-1 8-6 triumph over Belarusian Uladzimir Ignatik.