Stosur into French Open second round

Former French Open finalist Sam Stosur gets her 2018 campaign off to a winning start on a rainy day three in Paris. 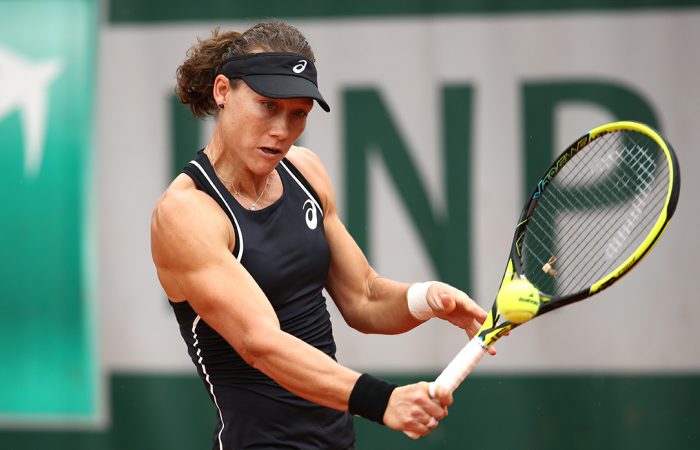 Sam Stosur has made a perfect start to her French Open 2018 campaign, overcoming Belgian Yanina Wickmayer in straight sets in the opening round.

The 34-year-old Australian powered to a 6-2 6-4 victory in a rain-interrupted match against the former world No.12.

“I was happy with the match. It was pretty solid, I did what I wanted to do,” Stosur told AAP after the match.

“Yanina can be really dangerous, but overall I was really pleased with how I stuck at it and played today.

“At Grand Slams, there’s never usually too many straight matches where everything just goes your way and you don’t have to worry about anything.

“There’s those moments where you’ve got to fight through it. So, yeah, I’ll take it.”

Stosur, who is aiming to reach the third round at Roland Garros for a 10th consecutive year, now faces No.30-seed Anastasia Pavlyuchenkova in the second round.

Stosur, who is playing doubles alongside Pavlyuchenkova in Paris this fortnight, defeated the Russian in Madrid earlier this month. Their head-to-head record is tied at four-all.

The news wasn’t so good for compatriots James Duckworth, John Millman and Matthew Ebden, all eliminated in the opening round.

Duckworth, returning from a horror run with injury and playing in his first event since an Australian Open qualifying loss earlier this season, was gallant in a 6-3 7-5 7-6(4) loss to No.3 seed Marin Cilic.

Millman started well, racing to a 5-2 lead in the opening set. But 19-year-old Shapovalov lifted to reel off five consecutive games to take the set. The 28-year-old Australian again built an early lead in the second set, moving ahead 3-1 but couldn’t maintain his momentum.

Ebden lost in a five-set battle against Italian Thomas Fabbiano which took two days to complete. The match resumed today at the start of the fifth set, with Ebden building an early 2-1 lead with a break.