Jaimee Fourlis captured her second ITF title of the season in Italy while Arina Rodionova went all the way to the trophy in Portugal. Marc Polmans and JP Smith reached ATP Challenger finals in North America. 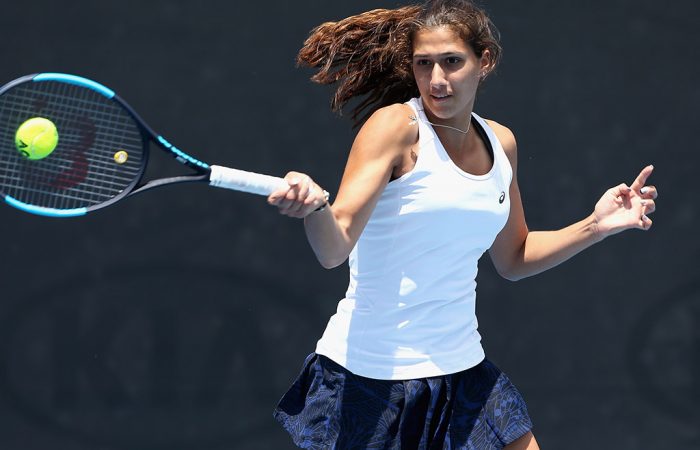 Jaimee Fourlis is nearing the top 200 after her latest triumph on the ITF Circuit.

The Victorian teenager captured the $25,000 title in Santa Margherita Di Pula in Italy, beating local Anastasia Grymalska 6-4 4-6 6-0 in the final.

Fourlis has now won 10 of her past 12 matches and her second title in three tournaments after winning the $25,000 claycourt title in Canberra in last March.

She is projected to rise to No.222 in Monday’s new release of the WTA rankings.

Arina Rodionova was another Aussie winner in Europe, going all the way to the title in Obidos, Portugal.

Recovery is important, but celebrating the title is important too 🤷🏽‍♀️🏆 pic.twitter.com/vZF1vBEwnC

She’s expected to improve to 129th in the WTA rankings and this week will head to Khimki, Russia for a $100,000 indoor tournament.

In doubles, 22-year-old lefty Ellen Perez is nearing a top 100 debut after reaching the WTA semifinals in Istanbul with Maria Irigoyen.

Perez is 14-4 in doubles matches this year, having played predominantly with Jess Moore – whom Perez beat in the opening round in Istanbul alongside Irigoyen.

On clay in the United States, Marc Polmans fell just short of his first Challenger title, going down 6-2 3-6 6-4 to Noah Rubin in the Tallahassee final in Florida.

Solid week in Tallahassee, Congrats to Noah on taking the title this week. #Challenger#75K#Alwaysdigging

The Victorian, who tore up the Australian Pro Tour in February and March – going 24-1 across five ITF Futures events – will rise to a career-best No.166 in Monday’s ATP rankings.

The one loss he suffered in Australia was to Max Purcell, who qualified in Tallahassee and went all the way to the semifinals before losing to Polmans 6-1 6-2.

Another Aussie, John-Patrick Smith, advanced to the ATP Challenger final in Leon, Mexico before going down to Christopher Eubanks in a third-set tiebreak.

Smith has won eight of his past 11 matches on the Challenger tour and will return to the brink of the top 200.