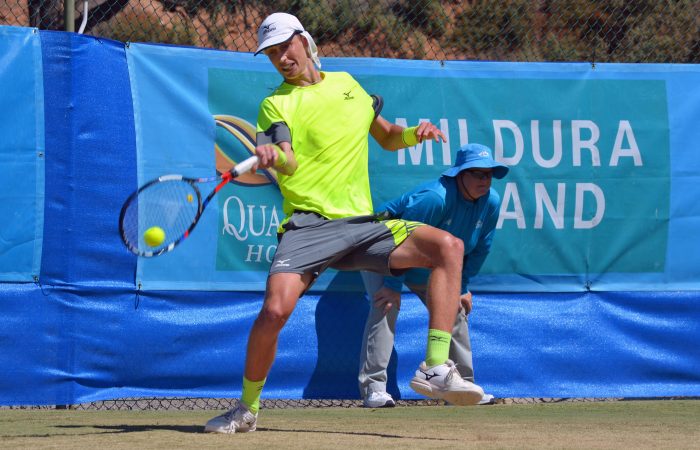 Marc Polmans has kept his remarkable winning streak alive, taking the title at the Mildura Grand International after accounting for unseeded Queenslander Thomas Fancutt on Sunday.

After backing up his first ATP Challenger title in Launceston with a win in Renmark, the Victorian has now won 15 consecutive singles matches, landing him back inside the top 200 for the first time since mid-2017.

“It’s pretty cool, I didn’t think I would do this after Launceston,” Polmans, 20, said. “But now I just have to keep up the hard work, that’s the most important thing.”

“Winning a tournament will never get old, it’s such a great feeling,” he added. “There was a lot of good players in the draw this week and anything can happen on grass, so you’ve got to be up for every match.”

The first set was a tight tussle between Polmans and Fancutt, who was playing in just his second ITF Futures final, with the Victorian eventually claiming the first set in a tiebreaker before taking charge in the second to post a 7-6(3) 6-4 victory.

“I’ve definitely made a few little improvements,” Polmans said of his dominance on the Australian Pro Tour. “My serve accuracy is better which allows me to get a few more cheap points and I also feel like I’m just hitting the ball a little bit bigger from the baseline, giving me more opportunity to come to the net and use my volley.

“Just a few little areas have made a big difference.”

Polmans said his recent goal was to secure a spot in the Grand Slam qualification draws. “I think I’ve done that now which I’m happy about,” he said. “And the second half of the year I don’t have many points to defend so I’ll be looking to get to a new career-high (currently world No.175).”

Meanwhile, Fancutt enjoyed a stand-out week in Mildura, adding the doubles title (with Jeremy Beale) to his finals run in singles. It was the second consecutive title for the pair after they claimed Renmark last week.

South Australian Luke Saville has also been impressive of late, his semifinal appearance in Mildura on the back of reaching the Renmark final – losing to Polmans in both instances.