A year on from reaching the quarterfinals, Nick Kyrgios is back at Indian Wells as the 17th seed. Young Aussie wildcard Alex de Minaur could face Juan Martin del Potro in round two. 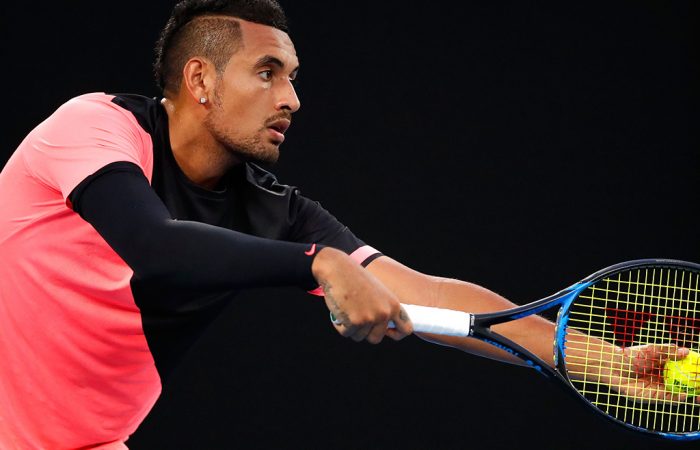 Nick Kyrgios has landed in a relatively open quarter of the Indian Wells draw as he attempts to scale the same heights in the Californian desert as this time 12 months ago.

In 2017, Kyrgios ousted both Alexander Zverev and Novak Djokovic in straight sets to reach the quarterfinals, before having to withdraw due to food poisoning.

This year, the 17th-seeded Kyrgios receives a first-round bye before taking on the winner of the match between Steve Johnson and Daniil Medvedev.

No.11 seed Pablo Carreno Busta could await in the last 32 before a fourth-round meeting with seventh seed Kevin Anderson.

Grigor Dimitrov heads that quarter of the draw as the No.3 seed, and should they both progress he could match up against Kyrgios in the quarterfinals.

The 18-year-old wildcard opens against big-hitting German Jan-Lennard Struff, with the winner to take on last week’s Acapulco champion and No.6 seed Juan Martin del Potro.

Another Aussie, Matt Ebden, has drawn former world No.6 Gael Monfils in the first round, with 15th seed John Isner – whom Ebden beat at the Australian Open – looming in round two.

In qualifying, Thanasi Kokkinakis fell 6-1 6-3 to Marcos Baghdatis in the first round, while Ajla Tomljanovic went down 6-4 6-2 to Sara Sorribes Tormo in the final round.

The women’s doubles draw was released on Tuesday, and Sam Stosur and Daria Gavrilova will team up.

Their assignment? A first-round dual with No.1 seeds Ekaterina Makarova and Elena Vesnina.