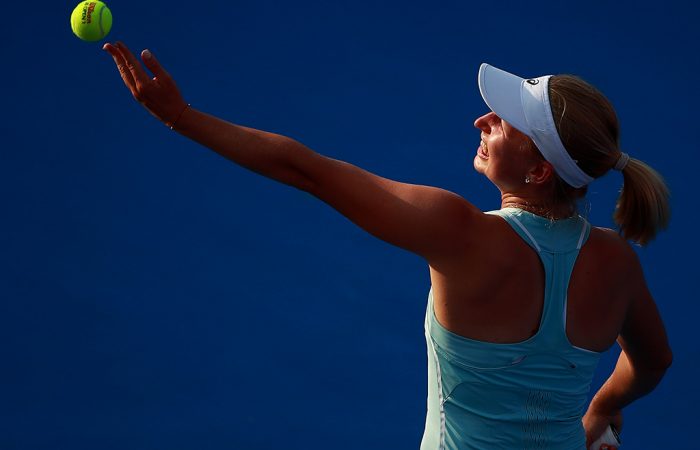 Daria Gavrilova has sealed a quarterfinal berth at the WTA Mexican Open in Acapulco after surviving local wildcard Renata Zarazua.

Gavrilova needed five match points to subdue the world No.253, who was buoyed by vocal crowd support at the hardcourt tournament and who had stunned Kristyna Pliskova in the first round.

“She had nothing to lose today and she was fighting until the end,” Gavrilova said on court after the 7-5 6-3 win. “I hope the crowd enjoyed it.”

Wednesday’s second-round match was a struggle. Gavrilova committed 12 double faults and 34 unforced errors (compared with just 11 winners) and let slip 4-1 and 4-0 leads in the first and second sets respectively.

.@Daria_gav is through to the quarterfinals!

But the Australian hung on, keeping her cool in a tense final game against her gallant opponent and remaining committed to aggressive play, especially with her forehand.

In other Aussie results from Acapulco, Thanasi Kokkinakis, Arina Rodionova and Matt Ebden bowed out in the second round.

At the WTA 125K event in Indian Wells, Ajla Tomljanovic progressed to the quarterfinals over injured opponent Varvara Lepchenko.

Lepchenko, the second seed, retired after Tomljanovic had levelled the match at one set apiece.

Next up for Tomljanovic will be either eighth seed Duan Ying-Ying or Viktorija Golubic of Switzerland.