According to team captain Alicia Molik, Ash Barty and Daria Gavrilova are the likely starters for Australia in singles on Saturday when the hosts take on Ukraine in Fed Cup. 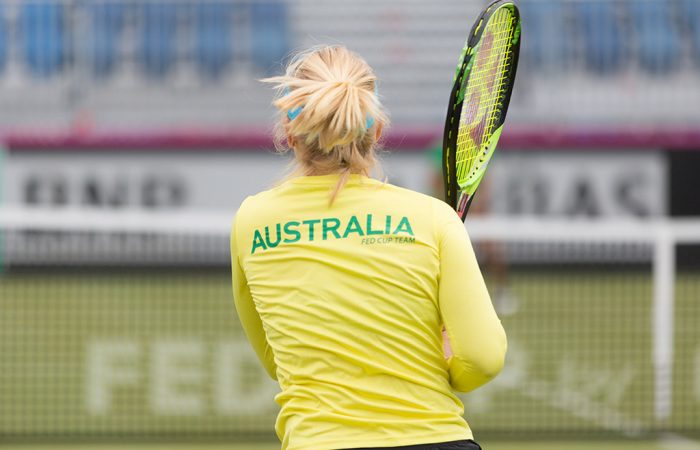 Barring any unforeseen circumstances, Ash Barty and Daria Gavrilova are likely to get the nod for singles duties on Saturday for Australia’s Fed Cup tie against the Ukraine.

That was according to team captain Alicia Molik, who addressed the media on Wednesday ahead of the weekend’s World Group II first round tie on a temporary grass court at the Canberra Tennis Centre.

“We haven’t made a decision on who’s playing but we’ve got our two lead players, Ash and Dash, both sitting around top 20 in the world so they’re our picks unless anything drastic was to happen,” Molik said.

“And of course Ash and Casey (Dellacqua) are without question our No.1 doubles pairing.

“You have to go on form and strength but at this stage it’s looking like a pretty routine selection for us.”

Molik was thrilled to have another singles option in Destanee Aiava at her disposal.

The 17-year-old currently sits at world No.188 – having peaked inside the top 150 last year – and gave world No.1 Simona Halep a fright in the opening round of the recent Australian Open.

“She (Destanee) may just get a chance to play. Like I said – if something happens to them or someone has an injury, Destanee is ready to play,” Molik said.

“And that’s why she’s been chosen, because I truly believe that she’s playing at a level where she can step in if we need her. So it’s great to have a third option as well, if we need to spread ourselves over the two days.”

The Ukrainian squad, in world No.3 Elina Svitolina’s absence, is lead by whizkid Marta Kostyuk, who stunned onlookers with her unlikely run to the third round at Melbourne Park.

Just 15 years of age, Kostyuk more last week won the Pro Tour title in Burnie and has since cracked the world’s top 200.

“We’ve kept a close eye on the Ukraine team over the summer, in particular Marta Kostyuk. She (is) … an exciting prospect for Ukraine,” Molik observed.

“And of course being so young, so many eyes have been on here. A great talent and they’ve got a lot of solid players within their team.”

The Fed Cup tie between Australia and Ukraine runs from 10-11 February in Canberra.