An impressive Aussie summer, Davis Cup heroics and a stunning upset of Andy Murray highlighted a 2017 season that has seen Jordan Thompso nominated for the Newcombe Medal. 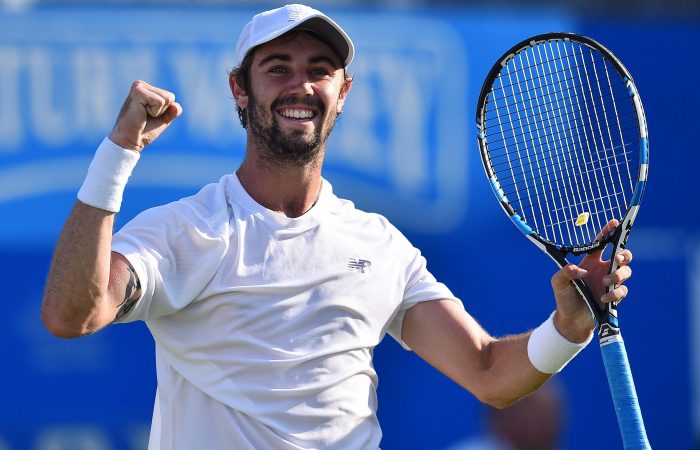 Who is Jordan Thompson? The question posed by a British newspaper after the Australian’s colossal upset of Andy Murray on grass at Queen’s Club in June is a little easier to answer after another fine season that ended with a second straight top-100 ranking.

Thompson is the 23-year-old from Sydney who has become a Davis Cup regular, toppling then world No.15 Jack Sock on the opening day of the quarterfinal in Brisbane, and teaming with John Peers for a comprehensive doubles win in the semi against Belgium, only to fall short against Steve Darcis in the live fifth rubber of that dramatic tie in Brussels.

He is the dedicated, super-fit and tenacious competitor who defeated former world No.3 David Ferrer en route to the quarterfinals in Brisbane, where he also won his maiden ATP doubles title with Thanasi Kokkinakis. At Grand Slam level, Thompson recovered from a two-sets-to-love deficit in the first round of the Australian Open against Joao Souza, and at the US Open stunned Sock for a second time despite being down a service break in the fifth set.

In between was that career-best result against Murray, the three-time major winner and 2012 Olympic gold medallist who was the reigning world No.1 riding a 14-match winning streak on grass when the lucky loser from qualifying vaulted into the main draw and shocked the reigning Wimbledon champion in straight sets.

Who is Jordan Thompson? He is also one of five Newcombe Medal finalists, a second time nominee, and “very honoured to be’’.

Clearly, the Murray match was the standout, Thompson hitting 12 aces and unaware until afterwards that the last player whose serve the masterful Scottish returner failed to break in a match was Roger Federer, back in 2015. “Beating a world No.1, I think that’s definitely got to be the highlight,’’ he says.

Davis Cup was another. Captain Lleyton Hewitt led the applause following two victories on debut against Czech pair Jan Satral and Jiri Vesely at Kooyong in February, and was again fulsome with his praise following Thompson’s heroics against Sock two months later.

“Playing for your country there’s just something about that,’’ Thompson says. “I can’t really describe it, but you feel like you want to do everyone proud and you want to play for your teammates, and that’s not usual in tennis, so I think it lifts everybody up,” says the Rio Olympian, who wears his allegiance on his tattooed right bicep.

“Brisbane was really special. It was my second ever Davis Cup tie and going out there first match against the United States, who we have such a history against in Davis Cup, and getting the win in four sets and putting Australia up 1-0 was extremely special and definitely a highlight of this year.

“The US Open (win over Sock), of course I’m very proud of that one as well. To win my first match at the US Open and do it in five sets, that was incredible.’’

The Darcis result, he admits, was “extremely tough times” which took some getting over. Thompson giving credit to his impressive opponent while lamenting some opportunities lost in the second set. But he did not feel he played badly, and lack of determination or effort was not as issue. With “Thommo”, as he’s fondly known, it never is.

And while a slight rankings dip may suggest otherwise, significant progress was still made in 2017. “It’s definitely harder to defend, and I think I played more Tour events than Challengers this year, so trying to play at a higher level. So I probably had better wins, but not as many points,” he says of a season curtailed slightly by recurring tonsillitis, for which surgery was eventually required.

“Playing at a higher level just raises your game, and you’re training harder and training with better guys, so the intensity is higher. Playing at a high level day in day out definitely helps.”

The focus with coach Des Tyson continues to be on playing more aggressive tennis, “I think that’s the way to go forward. The guys on tour, they don’t let up, and everyone’s got a great strength and they use it to their advantage, so I’ve got to do the same thing.’’

So, then, who IS Jordan Thompson? How would he describe himself? “That’s a great question. I don’t know,’’ he laughs. “I like to keep to myself, and I don’t really get ahead of myself too much. That (Murray upset) was just a tennis match – it happened to be a good one for me and not so good for him, but he’s still an unbelievable player… it just proves that anyone can beat anybody on any given day.’’