Newks: No rest until Gavrilova hits her best

A Newcombe Medal finalist in 2017, Daria Gavrilova has mixed feelings about her "up and down" year. 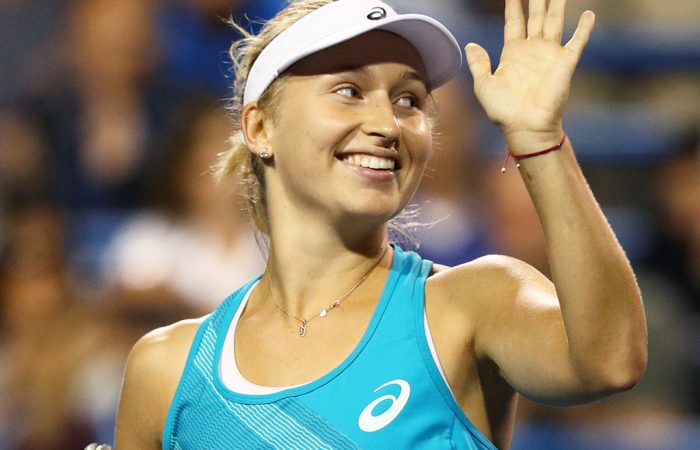 Daria Gavrilova finished the year exactly where she started it in a rankings sense – at No.25 – but otherwise in a slightly different place.

Winning her first career title, at New Haven in August, has given her the belief that what she has achieved once can be repeated, even if her No.1 objective for 2017 remained unfulfilled.

The 23-year-old had set herself from the outset for a berth at the WTA Elite Trophy in Zhuhai, contested by players ranked 9-19. She was still in contention until the final qualifying week, when she retired hurt – and fatigued and floored with jetlag following the marathon final in Hong Kong delayed by Typhoon Khanun – from the second round of Moscow’s Kremlin Cup.

Having fallen just short at the end of what she describes as an “up and down” season – concluding with her nomination among the five finalists for the Newcombe Medal – Gavrilova thus rated it a solid but not spectacular seven out of 10 overall.

“Really happy with my first title,’’ she said in a break from preparations for 2018. “I really was waiting for it for a long time, I really wanted it, so it’s definitely a highlight of this year.

“But my main goal as I said from the very beginning of the year was to make Zhuhai and I didn’t make that. With that is a top 20 ranking, so I’m a bit disappointed that didn’t happen. I guess I’ve backed up the rankings from last year – literally! – which is pretty good, but I wanted to make it to Zhuhai even more.’’

Apart from defending her fourth round points at the Australian Open, Gavrilova won just a single match at the three remaining Grand Slams, falling in lengthy three-setters at Roland Garros (to Elise Mertens), Wimbledon (Petra Martic) and Flushing Meadows (Shelby Rogers, in the longest women’s match in the tournament’s history).

The moral of the story: it’s less about winning the most points than winning the right ones.

At both the French and US Opens, too, Gavrilova arrived having contested the final in a busy preceding week. “I can’t just win easy, I have to work hard, and maybe I just have to think about the schedule with my team,’’ she says.

For a similar reason, her serve remains ripe for further improvement, having dropped away late in the year in particular. “Just getting more free points on my serve will help a lot overall my game, not having such physical points,” she said. “I can’t just hit a winner off a return so I’ve got to do something on my serve where I’m actually in control.’’

Having grabbed the Australian No.1 ranking from Sam Stosur during the clay court season, only for Ash Barty to pinch it on the Asian swing, Gavrilova admits she would like it back, while also positive about the friendly competition in the local women’s game.

“It’s really cool that there’s three girls inside top 50 and actually the whole door is very much opened, so maybe we should a race who can make it to top 10,” she smiles. “I wish we can all do that so I don’t care who gets there first – hopefully me!’’

For now, though, the monkey is off her back and the New Haven trophy in the cabinet, with other finals in Strasbourg and Hong Kong adding to the Victorian’s debut decider in Moscow in 2016. Back-to-back wins against Grand Slam finalists Agnieszka Radwanska and Dominika Cibulkova were a highlight, and her first Tour-level title the reward.

“I felt really comfortable against Aga and I was pretty nervous playing against Dominika; that morning I had a lot of thoughts, but ended up just really working hard and fighting,” Gavrilova says. “I was actually down a break in the third set but I just kept believing and then played some amazing points.

“I just feel a lot more confident – knowing that, ok, I can win five, or four, matches in a row, knowing that I’ve done it before, that I can play a good match and then back it up. Now I know that it’s doable.’’