There were incredible highs and some low moments too for Nick Kyrgios in 2017, whose stellar victories and Australian Davis Cup representation has seen him nominated for the Newcombe Medal. 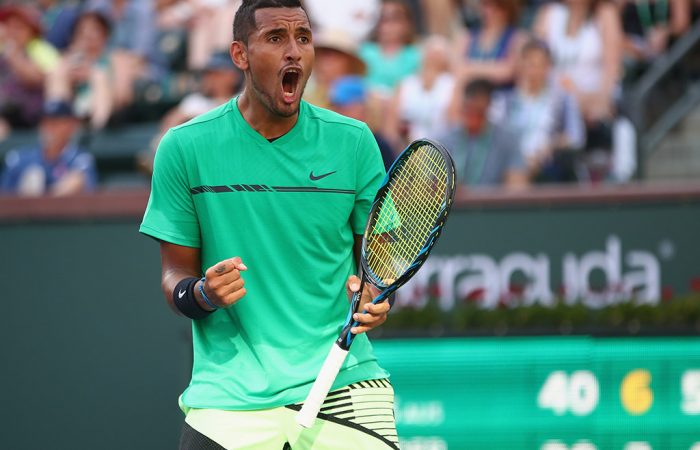 There is no such thing as a dull season for Nick Kyrgios, and Australia’s top-ranked man made no exception of 2017.

There was brilliance. There always is. There were injuries, so more of the same there, too. No titles, and no grand run into the second week of a major, but two finals including a first at Masters 1000 level in Cincinnati, wins over Rafael Nadal and Novak Djokovic, and a role in one of the ATP’s matches of the year – against Roger Federer in Miami. Add in, a dazzling and entertaining performance for John McEnroe’s Team World at the inaugural Laver Cup in Prague, which set the tennis world alight in September, a new event inspired by Roger Federer to honour Aussie tennis legend Rod Laver.

If his friend and Davis Cup captain, Lleyton Hewitt, is fond of saying that Davis Cup is responsible for the highest highs and the lowest lows of a player’s career, then Kyrgios experienced some of that, as well. He carried a 3-0 singles record from Australia’s first two ties into the semifinal in Belgium, won on day one, lost on day three, and left no-one in any doubt how much all of it meant.

“2017 has been a year of ups and downs for me and one I will look to improve on in 2018, but the real highlight in 2017 for me was having the opportunity to pull on the green and gold in Davis Cup alongside an unbelievable captain in Lleyton Hewitt and a great group of guys as team mates,’’ Kyrgios says.

“Davis Cup was my only goal this year and I poured my heart in to it, and I will do so again in 2018 in the hope we can go on and win it for Australia. To have my Davis Cup commitment recognised by way of a Newk Medal nomination is nice and I wish all the other nominees the best of luck on the night.”

Indeed, it was the fraternal camaraderie of Davis Cup that Kyrgios credited for rekindling his waning desire for tennis, following a difficult end to 2016 that carried over into a second-round exit from the Australian Open, via a 10-8 fifth set against Italian Andreas Seppi.

A self-described “dark place” became a much brighter one with the help of the Canberran’s tennis friends. The call that changed everything was from Hewitt. The invitation: to the pre-Davis Cup camp in Melbourne ahead of the Kooyong tie against the Czech Republic. The timing: perfect.

“I went and spent a week with my girlfriend and then ‘Rusty’ called me up and he really wanted me to play Davis Cup and that was the best thing I could have done,” Kyrgios said in March.

“Just coming back and being with the boys. I just found some enjoyment practising again. I don’t know what happened. Something switched and now I’m really enjoying it again. We still talk to this day, the whole Davis Cup team. That’s helped me the most. Having some people on my side. They have my back. That’s been key.”

Soon enough, there were back-to-back wins over Djokovic in Acapulco and at Indian Wells during a pre-clay surge, only for injury to intervene mid-season in the form of three successive retirements at Queen’s, Wimbledon and Washington. In the end, there were just two match wins at Grand Slam level for a player who started at 13th in the rankings and finished at 21st with a 31-14 singles record.

The bar is high, and even Kyrgios admits he didn’t clear it as he would have liked, but the upside is that, at 22, the year still delivered four wins against top-10 opponents, continued what should be a fascinating rivalry with contemporary Alexander Zverev and confirmed a heart that bleeds green and gold.

So much upside. So much still ahead for the outrageously talented 22-year-old. A compelling story, from every angle. As always.