In a better place mentally in the second phase of her career, Ash Barty soared into the top 20 in a breakout season, and as a result is among the Newcombe Medal finalists for 2017. 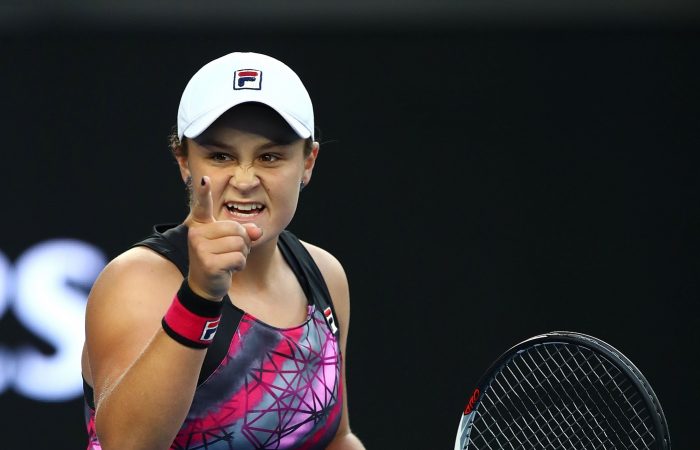 Success helps, of course, but there is much more to the second coming of Ash Barty than the numbers confirming the 21-year-old as Australia’s top-ranked woman and one of the sport’s most improved. “Comfortable” is a word Barty uses often these days, as she talks openly about everything from her evolving game, to life on tour and how much better she feels in her own skin.

It seems almost hard to believe now that just two years ago the talented young Queenslander was still yet to find her way back to competition after a 21-month absence. The return journey included a cathartic stint playing Big Bash cricket, but it was tennis that Barty soon realised was her first love.

Injuries punctured her early progress, but that was a delay rather than a derailment. Her first full season at senior level has been a triumph, having started with no grander ambition than a place inside the top 100 but ending with her maiden career title in Kuala Lumpur, a first Premier 5-level final in Wuhan, four top 10 scalps, qualification for the WTA’s Elite Trophy in Zhuhai and a guaranteed Australian Open seeding.

Her doubles CV, meanwhile, was boosted by three more titles with Casey Dellacqua, runners-up honours at the French Open and a debut appearance at the WTA Finals in Singapore.

“I think I just learnt my lessons, and I feel like I’m able to play with more freedom on the court, and even the matches where we haven’t come away with the win, I’m still able to walk off the court pretty happy with the way I went about it; it wasn’t just about the result.

“We may not play our best tennis every single match but I think my level I’m able to bring match in, match out has been so much better, and just having that consistency. We haven’t had too many shockers, really, where we’ve come off the court and said ‘what happened there?’, so that’s been probably the best thing. We’ve had a really, really good year.’’

Barty’s habit of referring to herself as a collective may be a quirk of conversation, but there is no doubting the influence and support of Dellacqua and an off-court team headed by coach Craig Tyzzer. She is fitter, stronger and more mature on court, moving far better, able to use her forehand and serve more effectively, and embracing the point of difference that is her slice backhand.

“The longer this year’s gone on, the more she feels like she sort of belongs on the tour,’’ says Tyzzer. “This is really her first full year, and to be around the girls more often and to experience playing against them, socialising with them, and seeing them in the locker-room, it’s a big change for her. And that’s where Casey’s made a big difference, in that she’s helped Ash fit in a lot more and certainly helped with a lot of those areas in her tennis.

“She’s enjoying it, which is terrific, she’s competing at a really high level and if she can maintain that throughout the years coming then who knows what she can do?’’

Dellacqua, who first teamed with Barty the year after she won the 2011 Wimbledon girls’ singles title, aged just 15, also sees much to like about version 2.0. “She’s happy,’’ smiles the veteran West Australian, who has been both friend and mentor. “Ash is a really good player, we’ve all known that, but she’s just a few years older, a lot more mature, can maybe grasp things better, so just a different Ash this time round. I mean, same Ash for me, just a little bit older, just in a lot better space.’’

The computer confirms it for a true rankings believer, with Barty confident the numbers do tell the story. “My first time around I wasn’t a top 100 player, I wasn’t ready to be a top 100 player, and now I feel like I’m comfortable on tour, I’m comfortable seeing the girls every day, and I’m comfortable just having a day in day out focus on trying to get better and trying to win matches,’’ she says, while acknowledging her lack of injuries as another key factor, and declaring a lack of fear no matter the calibre of her opponent.

“It’s my first really full season ever where I haven’t had any age restrictions or anything like that, and it makes next year challenging because we have certain periods where we’re defending some good results, but that also makes it exciting when you have something new to aim for and some new goals, so I think next year can hopefully be bigger and better.’’