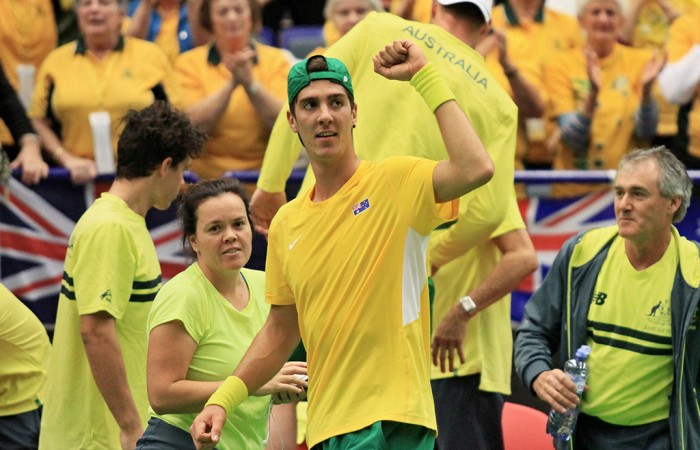 The tie, to be held in Brussels from 15-17 September on indoor clay, marks Australia’s second semifinal appearance in three years.

“Thanasi has always shown commitment to the Davis Cup team and his performances in 2017 speak for themselves,” Hewitt said.

“We are so lucky to have such depth among the group and can call upon him heading into this crucial semifinal.

“We’ve been working towards this moment all year, and the whole team has made Davis Cup a priority in their schedules. They’ve all had it at the back of their minds and we are so close now.

“Both Nick and Jordan have been relentless in their approach to Davis Cup, both undefeated and each winning three matches. In particular Jordan’s performance against Jack Sock in the quarterfinals against the United States really set us up, and it was incredible to see him step up and get another win over Sock at the US Open last week.

“John Peers continues to be a cornerstone of the team and currently holds the world No.2 spot in men’s doubles. We couldn’t be in a better position and we’re going to Belgium to try and secure that spot in the finals.”

Kokkinakis’ return to Davis Cup duty comes after a frustrating 18 months out of the game due to injury.

Since being back on tour, the South Australian has risen steadily in the rankings and posted big wins over top-20 players including Milos Raonic at Queen’s in June and Tomas Berdych at Los Cabos in August, where he also reached his first singles final.

Belgium will play its second semifinal since 1999 after defeating Italy 3-2 in the quarterfinals.

Australia and Belgium have met five times, with the head-to-head tied at 2-2.

A win over Belgium would see Australia host the Davis Cup final at home in late November against the winner of France and Serbia.

Australia is second only to the Americans on the all-time list of Davis Cup champions, having won the title 28 times.

The winner of this tie will play the winner of France and Serbia in the Davis Cup by BNP Paribas final from 24-26 November.