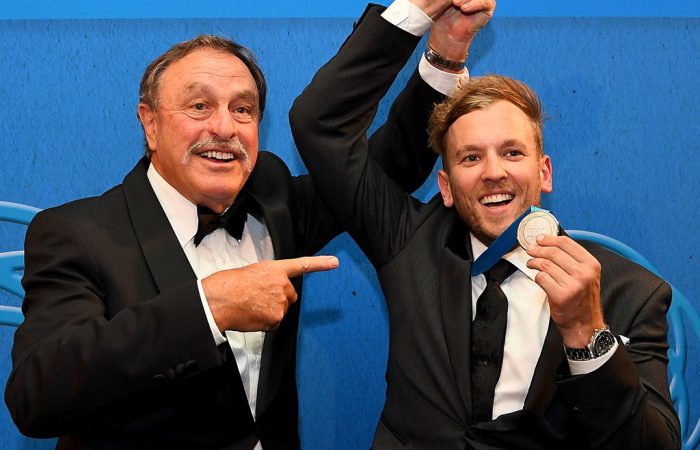 Dylan Alcott on Monday night capped off an incredible year by being awarded the highest honour in Australian tennis, the Newcombe Medal.

The world No.1 was bestowed the award at a gala celebration at Crown Palladium in Melbourne, attended by a who’s who of Australian tennis.

“It’s just unbelievable. It’s been the best year of my life bar none,” Alcott said on stage after collecting the award.

“(It’s amazing) to be given this award in honour of Newk, who’s such a tennis legend, someone that I looked up to when I was young, watching videos of him play.

“I’m not going to lie. I really wanted to win this award. Because we have an Athlete with a Disability category, which is a huge honour, but I see myself as an elite athlete first and foremost who just happens to have a disability and uses a wheelchair to play.

“To be recognised for the highest honour, Newk, it means so much to me … this award absolutely smashes that glass ceiling for elite athletes with a disability.”

On court, Alcott began 2016 with wins in Brisbane and Sydney before successfully defending his Australian Open crown in Melbourne.

The world No.1 partnered with fellow Victorian Heath Davidson to win the World Team Cup in Tokyo before winning two Paralympic gold medals – in singles and doubles – in Rio.

His other titles in 2016 include the South Africa Open, Japan Open, Open de France and British Open.

“I want to thank all the other nominees: Daria, Sammy, Johnny Thrillman, Peersy, Jordie and all the players at Tennis Australia,” Alcott said.

“When I roll into the gym or the physio room you guys are always really supportive of everything I believe in and treat me like an elite athlete, like one of you guys. And I can’t thank you all enough for that – it really does mean a lot to me.”

The Newcombe Medal is the premier award presented on a night that recognises players, coaches, clubs, communities, volunteers and officials for their service to the sport in Australia.

The awards ceremony has been held annually since 2010.

A highlight of the evening’s celebrations was the emotional presentation of the President’s Spirit of Tennis Award to the late Angie Cunningham, who lost her long battle with Motor Neurone Disease last month.

Her father Bill Woolcock accepted the award on behalf of the family from friend Hamish McLachlan.

Alcott and Davidson were also awarded Most Outstanding Athlete with a Disability at the ceremony.