A former junior tennis star who later devoted herself to raising awareness of Motor Neurone Disease, Angie Cunningham - who passed away in October - has been honoured with the President's Spirit of Tennis Award. 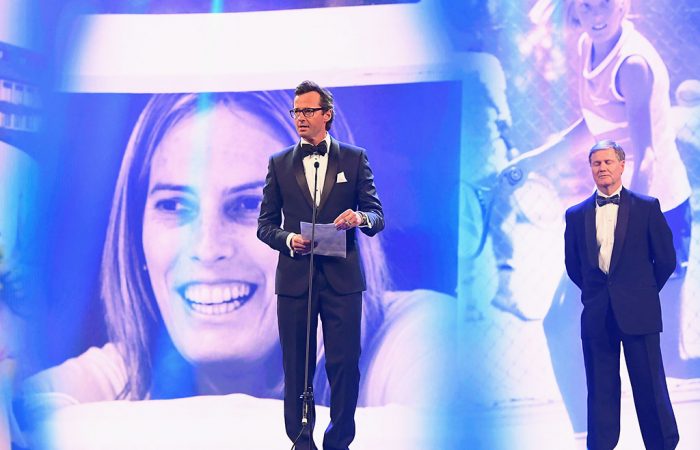 The late Angie Cunningham was honoured with the President’s Spirit of Tennis Award at the Newcombe Medal, Australian Tennis Awards on Monday night in Melbourne.

Cunningham lost her battle with Motor Neurone Disease (MND) in early October 2016 at age 43, having worked tirelessly to raise awareness of the disease in Australia.

She leaves behind husband Pat and children Sophie and Maggie.

The award recognises a person who possesses leadership, passion, sportsmanship, goodwill and dedication to the sport while making a major contribution to the stature of tennis.

Her father, Bill Woolcock, accepted the award on her behalf.

At age 14 she left her home state of Tasmania to attend the Australian Institute of Sport, where she honed her game.

She would go on to work as the vice president of player relations and on-site operations at the WTA.

After being diagnosed with MND – an incurable condition with no treatment – in mid 2012 Cunningham devoted herself to raising awareness of the condition in Australia, pulling together a network of tennis stars including Serena Williams, Martina Navratilova, Pat Rafter and Lleyton Hewitt who joined the cause to raise both MND funds and awareness.

In the latter stages of her battle with MND, Cunningham was confined to a wheelchair, unable to move and communicating via iPad using her eyes.

She conducted an in-depth interview with friend and sports broadcaster Hamish McLachlan over the space of five months, which was published in April 2016.

During the interview she discussed her tennis career as well as her diagnosis of and struggle with MND.

McLachlan spoke at the Newcombe Medal on Monday night in honour of Cunningham.

“Ange alongside her husband Pat played a huge role in raising awareness of MND in Australia. Initially through their Laugh to Cure MND campaign which was launched at the Australian Open, they raised $100,000 in 10 days,” he said.

“And since, alongside (others) Ange and Pat have helped raise tens of millions of dollars through the Cure MND foundation.

“Ange was also a planner. Knowing she would not be around for major milestones in her daughters lives, Ange, with the help of a friend, wrote her two daughters a book.

“It details her life and lessons from her life learned along the way. It offers advice and guidance for the girls as they grow up, from bra selection to marriage and childbirth. It even lists mobile numbers of people to call for specific occasions.

“If it was available for sale in book stores, I promise you, it would be a best seller.”