Sam Stosur, Bernard Tomic and Nick Kyrgios were all guaranteed to avoid seeds until at least round three - but they won't have to wait long before running into tournament heavyweights. 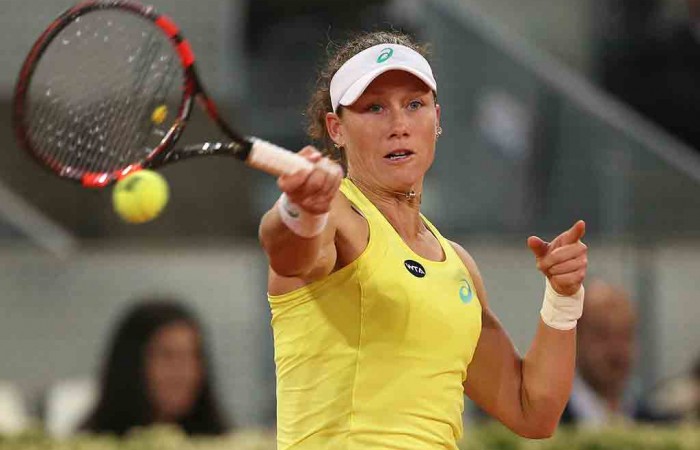 Australian tennis’s big guns won’t be lacking opportunities at the French Open after copping a rough time at Friday’s draw in Paris.

Spearheads Sam Stosur, Bernard Tomic and Nick Kyrgios were all guaranteed to avoid seeds until at least round three – but they won’t have to wait long before running head first into tournament heavyweights.

Stosur, Australia’s top-ranked player, 2010 finalist and two-time semifinalist, opens against American Madison Brengle and is projected to meet defending champion and world No.2 Maria Sharapova in round three.

Tomic, the 27th seed, faces a qualifier first up and could strike world No.1 and hot title favourite Novak Djokovic in the third round.

Before that, Tomic must find a solution to his recent claycourt struggles and win a couple of matches – and he potentially faces a second-round showdown with in-form teenage countryman Thanasi Kokkinakis.

Kokkinakis also drew a qualifier, while Australian Open quarterfinalist Nick Kyrgios, seeded at a Grand Slam for the first time, takes on Denis Istomin in his opener.
If he gets past Istomin, Kyrgios will play a qualifier for a likely third-round shot at third seed Andy Murray, with the Scot unbeaten in 10 matches on clay in 2015.

Casey Dellacqua will take on Ajla Tomljanovic in an all-Australian affair, with Daria Gavrilova up against Swede Johanna Larsson in the same quarter of the draw.

Jarmila Gajdosova faces French wildcard Amandine Hesse and could run into Stosur in the second round.

As the draw was taking place at Roland Garros, Olivia Rogowska scored a fighting three-set comeback win over Brazilian Beatriz Haddad Maia to boost Australia’s representation to a dozen players in the singles.

Roger Federer fared best of the men’s title contenders, landing in the opposite half of the draw to Djokovic, Murray and nine-time champion Rafael Nadal.

Seeded sixth this year after failing to win a solitary European claycourt title en route to Paris for the first time in a decade, Nadal is on a quarter-final collision course with Djokovic,

Should such a blockbuster match-up materialise, the winner would likely square off with Murray in the semifinals.

Women’s top seed Serena Williams was handed a tough draw and could face former world No.1 and two-time Australian Open champion Victoria Azarenka and also sister Venus before the quarterfinals.

Who the Aussies face at Roland Garros