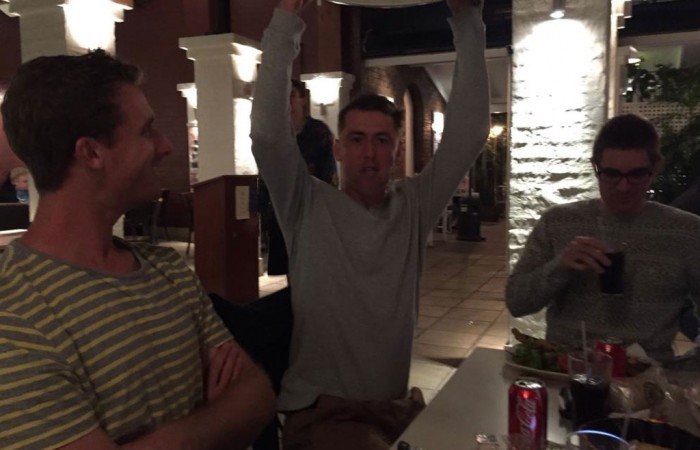 When our experienced players decided to give a shout out of support to fellow Junior Fed and Davis Cup teammates, the response was incredible. As roles reversed this week for Fed Cup, the response was just the same.

And the support didn’t stop there for our Aussie tennis players however this time; it was for the ‘Norman Hotel 1kg challenge’ – to eat a 1kg piece of steak.

This is not the only challenge Sam Groth is participating in; this time for a good cause. Good luck Sam… or rather Scotty Gregory.

Wanna see me smash serves at some1 for a good cause? Go to http://t.co/FGHwtV7g1n for info & to donate! @DonateforaMate @TennisAustralia

Twitter can be used for just about anything: photos… conversations… reflections.

I worked I tried I fought and I am shattered right now.

It seems that when Aussie tennis players are not playing or watching their own, another sport takes its place.

Earlier in the week, Nick Kyrgios notified the world that he is returning to the court.

Today is the day, back on the road and heading to Barcelona. Looking forward to getting back out and competing hard. #Boom

Who knew he spoke Spanish, or so we thought?

Not going to lie, that was a Google translate job!! Good morning everyone!!

For the record, his tweet translates to: “Good morning to all. Nice to wake up in the beautiful city of Barcelona.”

And as a pre-cursor to our finale, Ben Mitchell wished his famous actor brother a happy birthday. Happy birthday Romeo (Home and Away)!

Happy Birthday @LukeMitchell__ keep killing it over in the states! Thanks for the support all year round. Your officially really old. #30

Finally it wouldn’t be a ‘Social Serve’ without an obligatory #selfie. This week’s winner: Daria Gavrilova (@daria_gav)