Todd Woodbridge feels that Australia’s Fed Cup team should be wary of a tricky Dutch line-up, but that the tie also provides an opportunity for plenty of gains for the visiting team. 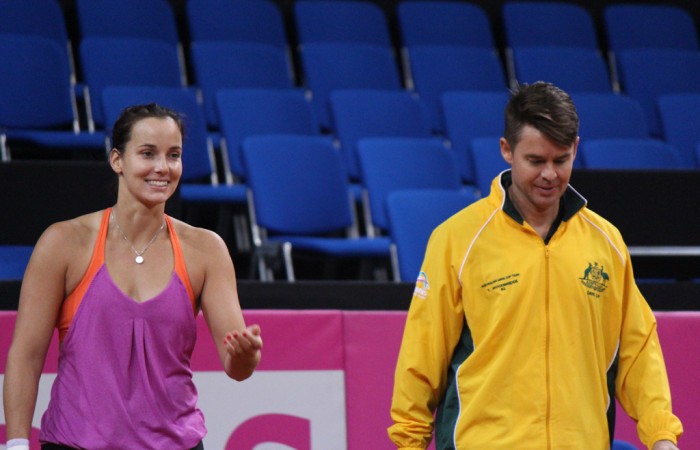 Todd Woodbridge feels that Australia’s Fed Cup team should be wary of a tricky Dutch line-up, but that the tie also provides an opportunity for plenty of gains for the visiting team.

Australia’s four-woman team of Sam Stosur, Casey Dellacqua, Jarmila Gajdosova and Olivia Rogowska lines up against the Netherlands on indoor clay at ‘s-Hertogenbosch this weekend – the winner seals its place in the World Group in 2016.

The Aussies have held down a spot in this elite eight-nation group since 2013 and is currently the world’s sixth-ranked nation in the Fed Cup standings.

It’s a reign of excellence that Woodbridge feels has been underappreciated.

“I think it goes unnoticed that the Aussie women have up until recently really flown the flag for our national tennis teams,” he said.

“By virtue of winning again (this weekend) they would remain in the world’s top eight teams – where they have been for the past three years – which is a commendable feat.”

Yet an Australian victory is by no means assured.

Despite all being top-50 ranked players, Australia’s three top women – Stosur, Dellacqua and Gajdosova – come into the tie under clouds.

Stosur has yet to string consecutive match wins together in 2015, while Dellacqua has also been mired in something of a slump. Gajdosova hasn’t played a competitive in more than a month due to health reasons.

Woodbridge nonetheless sees the positives in such a situation.

“This tie is a great opportunity for Sam to find some form on clay. She really should be able to win her matches, and also she’s got the added advantage of having the captain (Alicia Molik) there to help with tactics and confidence if it gets tight,” he said.

“Although the last few weeks haven’t been perfect, Gajdosova is in some of the best form of her career. She’s certainly got confidence; her last performance in Fed Cup against Germany was excellent. Fed Cup is a place where Jarmila thrives on having the team unit behind her.

“For Casey, it’s a matter of getting back in the groove of the tour after taking a break (and skipping Indian Wells) for her cousin’s wedding. She has to get used to be being back on the road.”

There’s also the matter of facing an in-form Netherlands team on Dutch soil. Despite only having one top-100 ranked player in Kiki Bertens and appearing the underdogs on paper, the team has won its past six Fed Cup ties.

The last, against Slovakia in the first round of World Group II, saw former world No.61 Arantxa Rus bely her current ranking in the 200s to win both her singles rubbers and help her team to victory.

Woodbridge said he was particularly wary of the rangy left-hander from Monster.

“The biggest danger comes from Arantxa Rus, who will be confident playing against Stosur,” he said.

“Although there’s a ranking difference, Sam’s struggled against left-handed players in the past, and Rus famously beat her at Wimbledon a few years back (in 2013).

“Yet it’s an opportunity for Sam on her favourite surface (clay) to put that memory in the past.”

There’ll be plenty of support for the Aussies from the sidelines, including from the team’s “orange girl” Kimberly Birrell.

Birrell follows in the footsteps of fellow Queensland teenager Priscilla Hon, who accompanied the team to Stuttgart for their tie against Germany in February.

Hon mentioned the boost this experience gave to her confidence, and Woodbridge felt the regular inclusion of young players into the Fed Cup fold was a fantastic piece of succession planning.

“I like what Alicia’s being doing the last few ties in taking some of the young Australian girls along to get the experience of being involved in Fed Cup, which is not something that always happened,” he said.

“It’s an important step in the process of building the next Australian Fed Cup team.”

Australia takes on the Netherlands in the Fed Cup World Group Play-offs on 18-19 April.