Marc Polmans staved off the crafty Mitchell Harper as semifinals were set at the 18/u Australian Championships. 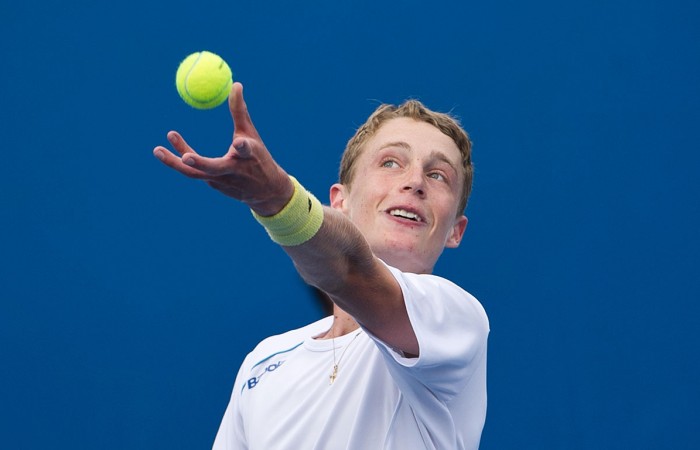 Second seed Marc Polmans shook off a nervy start to book his place in the semifinals of the 18/u Australian Championships with a 6-3 6-2 win over seventh seed Mitchell Harper today.

Having only conceded 13 games throughout his first three matches, Polmans might have been expected to be the fresher player from the outset but Harper dictated play early on, pushing the first three games to advantage.

With a game-style akin to that of Japanese world No.5 Kei Nishikori, Harper was like a brick wall in those initial stages, nullifying Polmans’ distinct power advantage with passing winners and tight angles.

Polmans had never faced Harper before and admitted his Queensland opponent began with the upper hand.

“He definitely started the match off pretty strong, I was down a few break points in my first service game and he hit some shots that I didn’t really expect,” he said.

While he struggled through his first few service games, the match was tied at 3-3 after at least half an hour of play.

That was when Polmans found his gear as he held in the seventh game and broke in the eighth. A love service game in the ninth saw him clinch the first set in what was a rapid change of momentum.

After conceding break points early in the second set, Polmans galloped away to win the last five games of the match.

In a match where the scoreline didn’t truly reflect the performance of the loser, Polmans was quick to acknowledge that only his best tennis would have beaten Harper today.

“I didn’t know what to expect but I saw a couple of his matches and he’s pretty crafty. He doesn’t miss many shots, so I knew I was going to have to play well which I did today, which is good,” he said.

It was the only two set quarterfinal on the boys’ side as fourth seed Daniel Nolan and sixth seed Mitchell Robins came from a set down to beat their opponents, the unseeded Jack Jaede and third seed Daniel Guccione.

Top seed Harry Bourchier withstood a second set surge from unseeded opponent, Blake Ellis, to book his spot in the final four with a 6-2 6-7(6) 6-3 win.

It was a completely different scenario in the girls’ quarterfinals as every match was decided in two sets.

Tjandramulia had spent over five hours on the court through her first three matches but made quick time of Kraemer defeating her 6-2 6-3 in just over an hour.

Tjandramulia was pleased with her performance but also quick to acknowledge her opponent. “I was (happy) but then she (Kraemar) started to play better at the end of the first set and the start of the second set so I was getting a bit tight,” she said.